Ballistic BJ Baldwin Takes it to the Next Level With “Recoil 4” in Cuba!

Ballistic BJ Baldwin Takes it to the Next Level With “Recoil 4” in Cuba!

We. Love.  Ballistic BJ Baldwin After watching the latest installment in Baldwin and ...

After watching the latest installment in Baldwin and Monster Energy’s Recoil series of video projects, we’re confident you will love him too! Baldwin, known to most as “Ballistic” BJ Baldwin, is a multi-time national off-road racing champion who has won every major off-road event, many more than once. He’s long been established as one of the elite off-road drivers in the SCORE series, of which he is the three-time champion.

During his downtime, Baldwin likes to jump behind the wheel of his Monster Energy-sponsored trophy truck and rip it up for the cameras, creating the Recoil series of productions with the folks from Monster, Toyo Tires, Rigid and King Off-Road racing shocks. Recoil 4 finds BJ ripping through the streets and back country of Cuba’s capital city, Havana. From donuts to jumps to some stellar parallel parking, Baldwin shows us his masterful control over the powerful pickup!

Go ahead and hit that play button and watch as Baldwin shreds the city for the cameras as the people of Cuba watch on! 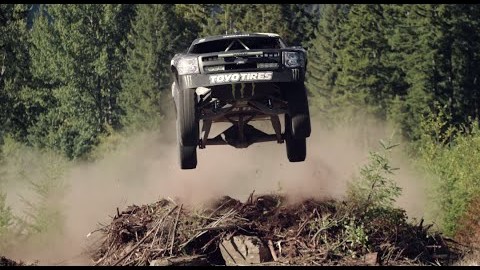