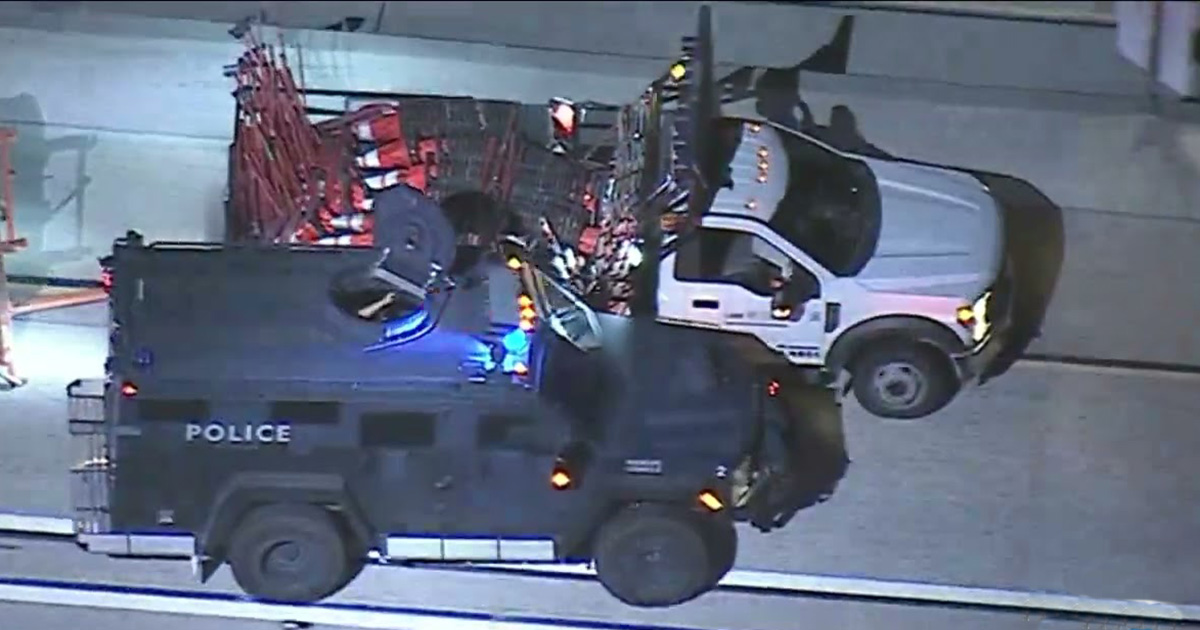 No, this isn’t an O.J. Simpson chase rerun but a recent California car chase moved in slow motion as an abundance of patrol cars were in pursuit of a suspect in an unlikely vehicle.

The chase was believed to begin when the suspect stole a car. After the vehicle became disabled, though, the individual moved on to a much larger target. After taking off with a construction vehicle filled with cones, and barricades and even pulling a trailer behind, the individual seemed determined to get away. Even after the vehicle took on a couple of flat tires, the suspect continued to flee to attempt to get away from the police.

Authorities seemed rather determined to apprehend the individual. This is when they decided to bring out the big guns in an armored vehicle that’s known as the Bearcat.

The armored vehicle slammed into the side of the construction vehicle, flat tire and all. At this point, things were looking less like a real-life chase sequence and more like something out of a movie or a Grand Theft Auto video game. We can assure you, though, that this was a very real event.

Eventually, when this construction vehicle would also become disabled, the individual behind the wheel decided to jump out and flee on foot, running down the highway as he would do anything to escape the tail. With the amount of manpower invested in chasing down the suspect, though, he didn’t have much of a chance. It didn’t seem to be a matter of if he would get caught but more of a matter of when and how.

Eventually, the chase would come to an end when police unleashed the K-9 unit which did its job, tracking down the suspect and bringing the chase to a screeching halt.

The video below showcases the situation that certainly caused a little bit of a stir on that Southern California night.

« Shawn’s ’55 First Start Up After the Rebuild