If there’s one event that every no prep racer has circled on their calendar, ...

If there’s one event that every no prep racer has circled on their calendar, it’s Outlaw Armageddon. As one of the biggest races of the year, the event has been known to attract loads of fans and some of the biggest racers in the game. Every last competitor has to make sure that they’re on their A-game. One false move and the opposition is sure to take advantage of the situation. This means that they could sneak in and take the win!

As with anything else in life, practice makes perfect! When Outlaw Armageddon 5 was getting ready to roll out the red carpet right in the Street Outlaws’ back yard, what better place to test than the very venue it would take place in?

That’s exactly what the crew did as plenty of familiar faces from the 405 all took to Thunder Valley Raceway. In drag racing, data is key. The more passes on a car, the more familiar the crew gets with how it will react to changes. Therefore, the more passes the better.

We know what some people are thinking here. Isn’t this an unfair advantage? We would argue that it certainly does offer a slight advantage but definitely not one that’s unfair. The only benefit here would be the same as any other racer with a home track advantage. Sure the guys and girls did get to test out the racing surface. However, that racing surface would drastically change come race day. During the no prep event, the promoters made it their business to make sure that it was a true no prep. This meant scraping the rubber off of the surface every couple of rounds. Putting two and two together means that the playing field is very much leveled out for all competitors.

Down in the tomeighty video below, we get to see how the 405 took it upon themselves to collect some data nonetheless. This is certainly an adrenaline-packed test session if we’ve ever seen one. Knowing what would be on the line the next day makes it all that much more intense! 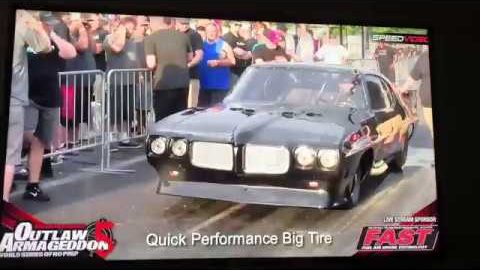