Bet Your Work Truck Doesn’t Move Out Like This…. Sleeper!

Bet Your Work Truck Doesn’t Move Out Like This…. Sleeper!

When it comes to the world of racing, it’s really hard to deny a sleeper of its ...

When it comes to the world of racing, it’s really hard to deny a sleeper of its cool factor. Nothing is better than seeing something sneak up behind high dollar sports car and take a little bit of cash from the owner. While they may not be pretty, beauty is in the eye of the beholder as there really is an art to hiding the fact that something is fast. There are lots of things that could clue a potential opponent into what it is that you have going on and preventing that is key!

This time, we catch up with a sleeper that definitely has a little bit of shock value just waiting to be unleashed when it makes a pass down the strip. There’s no way that someone who has yet to see the truck in action is even going to stand a chance as the old school Chevrolet work truck isn’t necessarily something that screams fast, that is, until the hammer drops and it really begins to make its way down the lanes with a vengeance. This thing definitely has a little bit of performance heritage hiding out under that hood that gives this truck a little bit of a kick!

If you follow along with the JMalcom2004 video below, you will be able to appreciate this monster of the machine as it opens up a can of whoop ass on the strip! After seeing something like this, you may just begin to develop a couple of trust issues which could be a good thing in the world drag racing because even though something might not look like it’s the fastest vehicle on earth, reality might spell a different story when push comes to shove and it’s out there laying the smackdown on some poor opponent.

I bet your work truck doesn’t move out like this…. 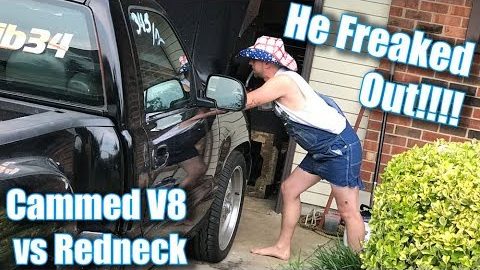