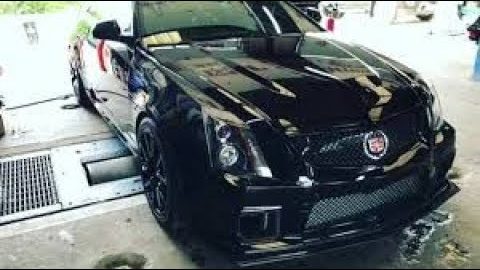 Most of us have seen the classic Chris Farley comedy Tommy Boy, where the late comedian works with David Spade to try to save his family’s business. Along the way during their misadventures, there’s a scene where Farley hops in the car at the gas station and leaves the door open, backing past a concrete pole that folds the door back against the front fender.

Well, apparently Big Chief pulled a Tommy Boy while shuffling cars around one night, leaving his beloved Caddy Jack CTS-V with the door folded back against the front fender. As we all know, doors aren’t built for that, and the damage to the car likely wasn’t cheap to fix. The car, which we have seen quite often on the streets of the 405 as well as on the Daily Driver race episode of Street Outlaws, has been a work in progress for quite some time now as it has evolved from a stock daily ride to a pretty formidable beast, although it’s still racking up miles as Chief’s daily mode of transportation.

In the video below, Chief and Shawn recount the incident, with Chief telling how he’d jumped out to see how much room was left between the Caddy and the Crow while pulling the Cadillac into the shop. Unfortunately, he left the gear selector just short of park, leaving the car in reverse as he jumped out.

With the supercharged powerplant cranking out a good bit of torque even at idle, the car took off backwards, leaving Chief to stare in bewilderment as the car raced toward a big yellow concrete pillar. Springing into action, Chief leaped over the door and into the driver’s seat, slamming on the brakes as quickly as possible. However, he was just a tad too late, as the huge door caught the pillar and was laid back against the front fender. Luckily, Shawn’s dad, a paint and body expert, was able to get the car fixed up so it could return to daily use.

« What Does The Dodge Production Line Look Like? Dodge Charger, Challenger and Chrysler 300 Production