Big Fight at The Track – Crew of Another Driver Taunts and Yells Until He Gets Out to Fight Back! 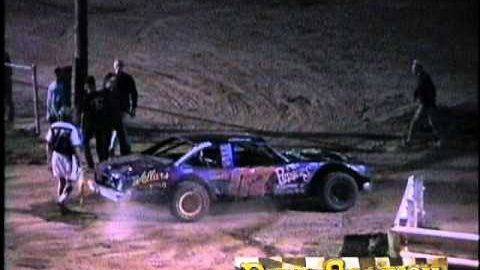 In any grassroots sport, emotions can erupt into outright brawls when competitors get fired up over their respective sports. You see it at local events from motorsports to rec-league softball and even the coaches and parents of little leaguers and Pop Warner football players who get so engrossed in the action on the field that they exchange blows with other parents and coaches.

At Pennsylvania’s Selinsgrove Speedway, we join the action on the last lap where we see two competitors tangle as they’re jockeying for position. As is often the case, there is contact between the two and one of the cars spins out, left behind the action as the rest of the cars sprint to the checkered flag. The driver of the car that spun out, obviously unhappy with the outcome, cranks his car and gets it pointed in the right direction, the waits for the field, now under caution due to his spin, to come back around. He singles out the car that sent him spinning and gives him a solid tap on the rear bumper, sending the message that he’s ticked off. He’s then directed to the pits, but as he’s entering the pit area, the crew from the other car meets him at the entrance and that’s when things really get out of hand.

Just hit the play button below and watch as the drama unfolds right there in turn one! I promise you will not be disappointed!

« Big Chief And Chuck Get Into It… Meltdown Between These Two is NOT Pretty!