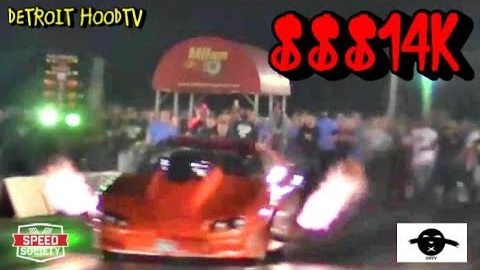 Back in the summer, there was a huge grudge/no-time race at Milan Dragway in Milan, Michigan that brought some of the south’s heaviest hitters up north to do battle for some huge money. One of the most hyped races of the weekend was this throw down between Florida native Justin “Little Country” Swanstrom and his sinister black Mustang known as Armageddon taking on South Carolinian JR Gray and Headshot, his badass orange Camaro.

These cars are both among the grudge racing elite, having taken some huge wins and laid down some stout runs throughout the season, although we don’t know the exact ET’s because grudge life. However, everybody on the property knew this was going to be a hell of a race, or at least it should have been. Unfortunately, as you’ll see when you hit the play button below, the outcome is a bit anticlimactic due to one of the cars losing traction at the hit. I’m not gonna spoil the outcome though, you’ll have to watch the video from DetroitHoodTV to see just how it goes down.

One thing I love about this video is how our camera man gets into the action in the staging lanes, where event promoter Jay Payso is holding court to iron out the details of the race and get the money counted from both parties. Swanstrom and Gray both kicked in $7,000 to make the pot $14 large, a pretty nice payday for whichever driver is able to keep the tires planted. While this negotiation went pretty smoothly, we’ve seen things get downright rowdy while the camps try to work out the money and any stipulations that may apply to the race.

We know the team that took the loss on this race is not known for taking losses lightly, so there may very well be a rematch of this race somewhere down the road, and you can bet if there is, there will be another stack of cash on the line, as well as pride and bragging rights!

« Don’t Let The Full Interior Fool You, This Mustang Is Quick!