“In the world of no pre drag racing it’s hard to find two bigger names ...

“In the world of no pre drag racing it’s hard to find two bigger names than Birdman AKA James Finney, and Kye Kelley, they squared off in yet another epic final round race at Outlaw Armageddon for $40,000! Where James Finney took yet another win from Kye!

The road to get there wasn’t easy for either guy as Kye had to race names like Shawn Ellington AKA Murder Nova in his new car, Sam Harvey in his big block, nitrous powered Nova who has been going rounds in no prep racing for some time now, as well as one of his biggest Rivals from the 405, Daddy Dave in his Procharged big block powered Nova known as Goliath, and the always fast Tony Foulks in his twin turbo 481x powered second gen Camaro, and James Doc Love, in his Monte Carlo

While Birdman had a pretty stout side of the ladder to get through himself, beating names like Mike Henson, in a New car to hit the no prep scene previously owned by Keith Berry, and ran the Radial vs the world scene. Winning Lights out 6. Davis Mangum in “Lucifer” With a nitrous assisted big block in his Mustang, Brent Austins Megaladon. A Big block Hemi with a giant Procharger hanging off the front who had just upset Larry Larson the round before, and getting a bye run into the finals where he squared off with Arch Rival Kye Kelley

These two are no stranger to each other, they have ran into each other at countless no prep races in the finals, a couple street races, and Tim Duncan’s arm drop race in San Antonio just the weekend before. Birdman has had Kye’s number at the track for some time, and his recent switch to a Hemi powered setup instead of his usual big block Chevrolet looked to make it even harder to catch up to him. Kye had the nitrous assisted Pat Musi 700+ cubic inch power plant turned up, and gave Birdman all he had, but it just wasn’t enough as birdman took the win by 3 cars, and solidifying himself as the undisputed King of no prep drag racing” 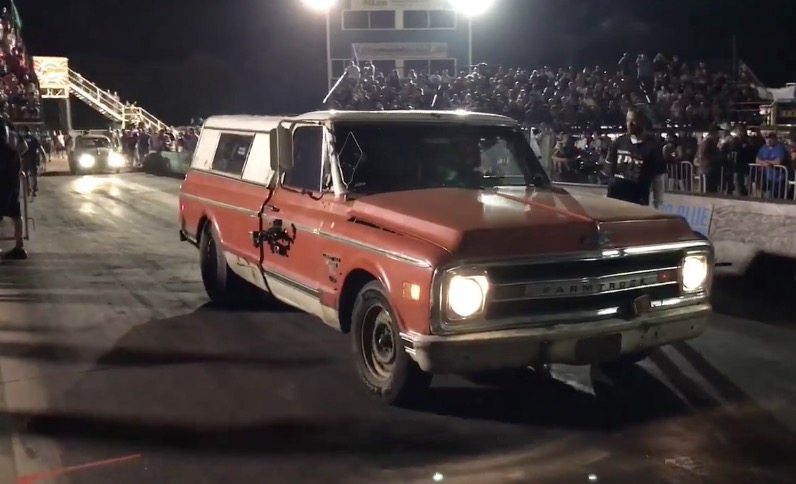