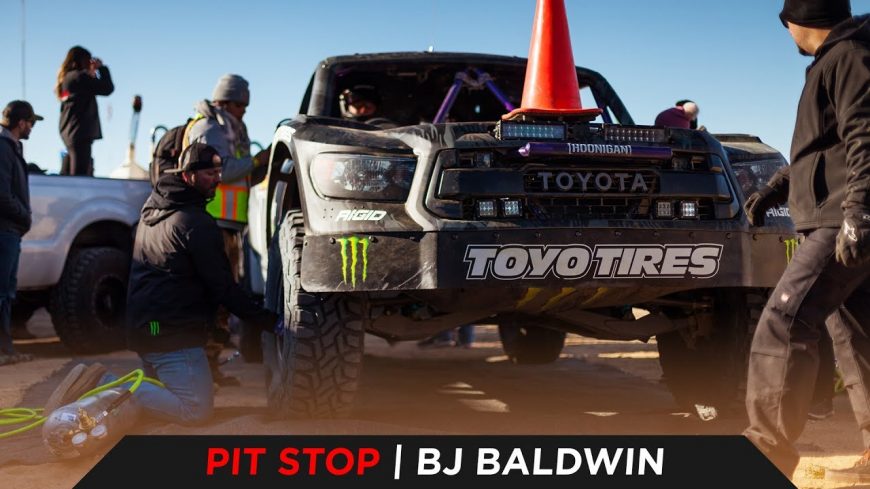 When you think of fast pit stops, you generally think of NASCAR, maybe Formula 1, or maybe even NHRA crews thrashing between rounds to completely overhaul their car for the next race. I know I personally don’t think of trophy trucks, but it would seem these guys actually do have pit crews that can throw down some pretty impressive turnaround times in the pits.

During the Toyo Tires Desert Invitational, legendary off-road pilot BJ Baldwin made a stop in the pits to change out the rear tires on his truck, fill up the tank with fuel, and have his crew check the truck over for any signs of damage. Jumping over the dirt wall alongside the pits – because what else would you do in a trophy truck, right? – BJ hits the pits and his crew springs into action.

Teams of three go to work swapping out the rear tires, completing the swap in just 30 seconds. When you consider these wheel/tire combos weigh considerably more than the wheels and tires used by NASCAR teams, I think 30 seconds to swap a pair of tires in pretty dang impressive.

Another crew guy drags the fuel hose over to top off the tank, while the rest of the crew looks on, in and under the truck, checking the suspension and chassis for any signs of damage before Baldwin heads back out onto the track. The whole stop takes less than a minute from the time BJ stopped until the left the pit stall, proving that these guys are pretty well choreographed and have obviously spent a great deal of time practicing these stops.

Baldwin had a strong truck, but would finish 11th after failing the complete the full 280 miles. Luke McMillin took the win, while Justin Lofton came in second and Apdaly Lopez rounded out the podium with a third-place finish.