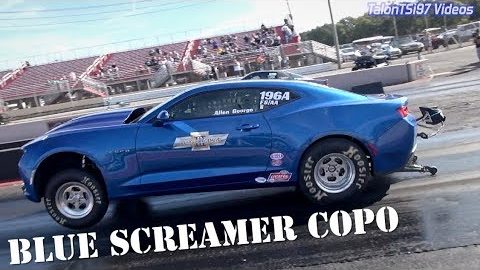 For all the hype surrounding the Dodge Challenger SRT Demon being the first factory car built specifically for quarter mile performance, that’s not entirely true. For years now, Chevy, Ford and even Dodge have been building Factory Stock cars to compete in the NHRA’s Stock Eliminator class. There’s a major difference, of course, in that these cars are not built for, or even technically legal for, use on the street, where as the Demon is still 100% street legal and, to be honest, perfectly at home on the highway.

Of the three automakers, it’s hard to say who is most well represented in the Stock ranks, but the video we have today from TalonTSi97 Videos is of a gorgeous COPO Camaro blistering the quarter mile a full second quicker than the heralded Demon. I’ll admit, this is sort of an apples-to-oranges comparison, but it helps put both cars into their proper perspective.

The COPO – which stands for Central Office Production Order – comes ready to do battle with Ford’s Super Cobra Jet and Dodge’s DragPack Challenger, all of which have their own proper designation and classes within the greater Stock class umbrella. This particular COPO is an FS/AA, which competes at 5.5 pounds per horsepower on o 9.40 second “manual”, or baseline ET. Of course, as you can see, the gorgeous blue Camaro is capable of running almost a full second below that. How quick a Stock Eliminator car runs under it’s manual is how the class is qualified, with the farther cars under the manual earning a higher qualifying position. However, the difference in a manual and an index is the drivers in Stock Eliminator can choose their own dial-in during the race instead of racing against a set index like Competition Eliminator, for example.

Just go ahead and hit that play button below and watch as the Blue Screamer III rips down the quarter mile, leaving with the wheels high in the air and, appropriately enough, the engine screaming.