This Boat is WAY too Big for an SUV, Owner Finds out the Hard Way

This Boat is WAY too Big for an SUV, Owner Finds out the Hard Way

When you first start to figure out the world of boating, there can be a lot of ins ...

When you first start to figure out the world of boating, there can be a lot of ins and outs that are going to take experience and time to be able to iron out. Just like anything else, nobody is going to be perfect on the first try and it might be an expensive journey to go through as you meet different situations and learn how they all work. However, as it turns out, some of these early boating situations end up being a lot more treacherous than others and some of them, well, just seem like a little bit of common sense would’ve been able to help out with them.

This time, we check out a situation that we could’ve told you right from the get-go was going to be an incredibly bad endeavor. In order to pull a pretty sizable boat, complete with a flybridge, out of the water, it appears as if somebody thought they were going to be able to get away with using a light duty BMW SUV to get the job done. However, after the boat went on the trailer, it looks like the rear end of the SUV immediately would be picked up into the air. We have to admit, though, that the SUV did have a little bit of a surprise muscle on board when it managed to pull the load forward far enough that the front wheels would get the vehicle grounded once again.

If you check out the situation below, though, you’ll be able to see that even getting all of the wheels on the ground still wasn’t enough to move the boat forward as it appears as if, after all of the struggle, the vessel wasn’t all the way on the trailer and was still dragging along the ground. This is definitely a “live and learn” moment and I don’t think that these people are going to be taking that small SUV to the boat ramp ever again, at least not for a boat this big.

Thanks for filming this awesome video Austin Nugent!

Captain Docks Massive Yacht in Monaco Like a BOSS 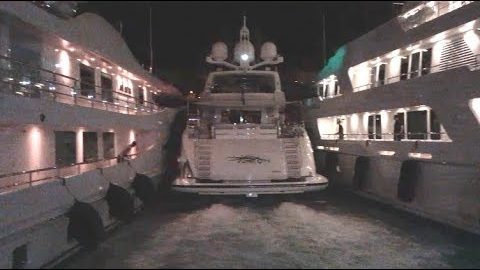