Breaking in the New Yard!! First Ever Burnyard Bash at Irwindale Speedway 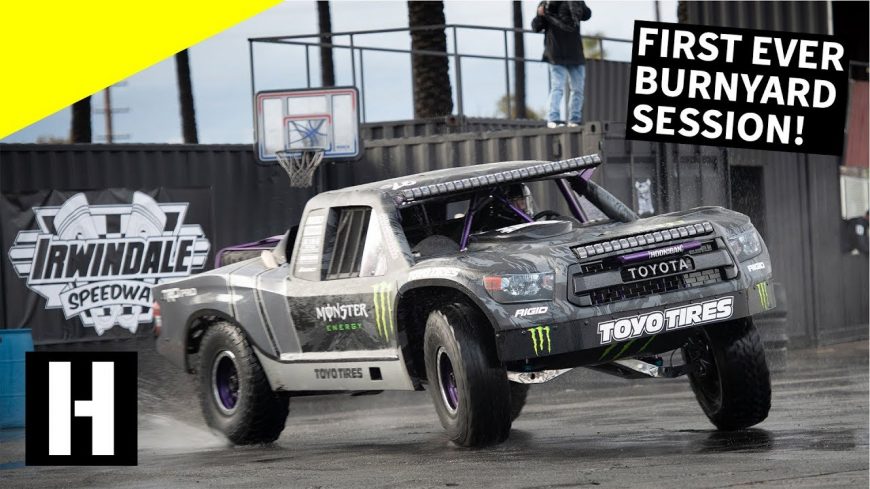 Some of the most fun the Hooligans ever had was doing insane things in their makeshift burnyard. For those who don’t know, the burnyard was the admittedly small – for its intended purpose anyway – area at Hoonigan HQ where countless cars were made famous when they ripped some nasty burnouts and donuts during their appearances on the Daily Transmission.

As with all good things, our time with the OG burnyard has come to an end, and while that’s certainly bittersweet thanks to the countless hours spent with some truly awesome builds, and people, doing Hoonigan things, the ending is only so that there can be a new beginning. In the words of House Greyjoy, what is dead shall never die, and the burnyard has only been reborn bigger, badder and better than before.

Moving to an Irwindale Speedways, where they have quite a bit more space, has allowed the Hoon Crew to revisualize and revitalize the burnyard, and holy crap is it awesome. With room to spare and the creative wackiness that only this group of numbskulls could come up with, the new spot has some awesome features, starting with the entrance itself. Double-stacked containers frame the drive-thru entrance, with the upper container having a see-thru plexiglass floor to watch as the cars below enter the yard.

There’s Meth Row, a trio of practically-brand-new RV’s that make up one wall of the yard, complete with propane tanks and meth residue.

One obstacle/feature I think will be the coolest will be Hector Sector, an elevated flatbed trailer that cars will be able to drift underneath while they’re ripping around the ‘yard. I would like to throw my name in the hat (sorry, photography legend and personal inspiration Larry Chen) to be the first photographer to stand on Hector Sector and shoot a car (or cars) drifting underneath. Can we make that happen, Hoonigan powers that be?

Hit the play button below and check out all the awesome footage from the first event at the new spot, as well as the plans the guys have for further developing and evolving the yard over the next few weeks and months.