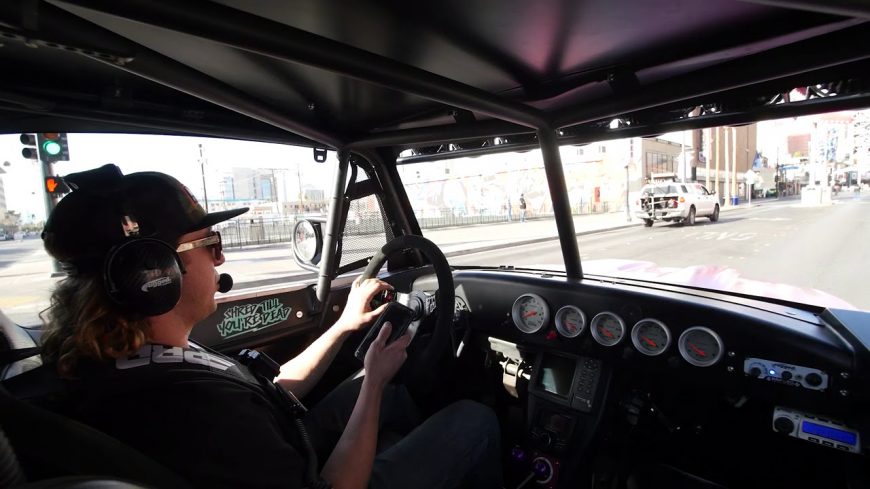 When you see some sort of off-road buggy in the sand dunes, seeing something like that yanking a wheelie isn’t all that uncommon, however, when you switch things up and head to the streets, you’re obviously not going to see as much of that sort of display once on a paved surface. In a situation like this, traction is a lot harder to come by and therefore, is a lot more unforgiving when it comes time to try and to pull the front wheels up. However, difficulty certainly isn’t the case for this buggy as it heads out there and shows us what it’s got!

This time, we check out a little stunt display that shoots at promoting the “Back to the Streets” social media campaign that is the driving force behind the release of the Urban Assault 2 video featuring Blake Wilkey, you know, the second part of the video that the guys got arrested for while blasting around in the streets in their off-road machine. We would say this is one good way to do it because when you’re given a view of the cockpit of this monstrous machine, you can practically feel the adrenaline rush that the driver is getting as he throttles it down and goes above and beyond in the name of putting on a display that the fans are going to want to see.

If you follow along with the video below, you’ll be able to see the brief display that will really have you amped up to see exactly what the rest of this footage is going to have to offer. With a teaser like that, you can’t help but get excited about what’s to come with the full-length footage. That had to be something special for the people who were standing nearby to watch a feat like this happen! It’s definitely not every day that you see a vehicle out on the streets pulling a full-blown wheelie like this!

« This Is The First Flying Car You Can Actually Buy!