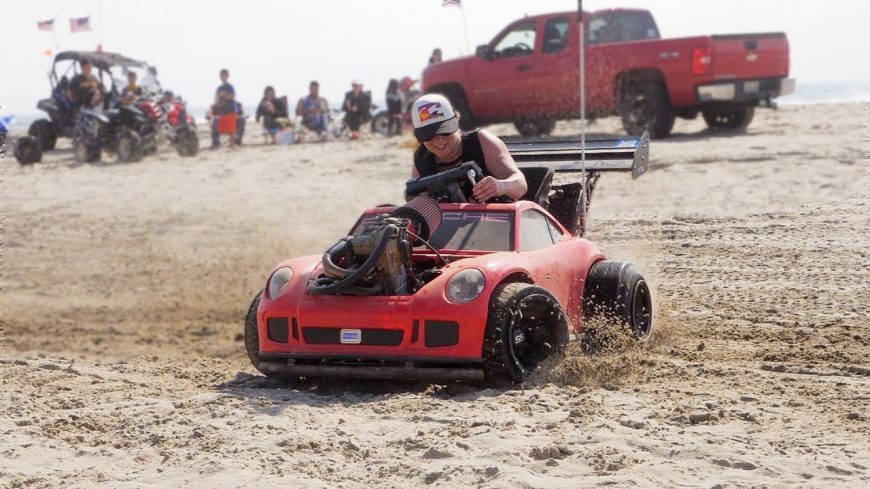 When most envision Power Wheels, they picture a kid’s toy putting along in the front yard at a couple of miles per hour. It’s generally a very tame and manageable machine. The idea is for just about any little tyke to go for a ride without hurting themselves. When adults get their hands on these things, though, sometimes, the “hurting themselves” part comes around full circle.

This time, we check out a situation involving such a Power Wheels machine. This is a pretty far cry from the dialed down child’s toy that comes straight out of the box from the toy store. Instead, this little Porsche has received an entirely custom outlook on like. Almost nothing here remains the same as it came out of the box. Instead, well, things happen to get just a little bit rowdy.

In this one, we’re able to ride along as this little machine gets the power treatment. It comes in the form of a 450cc dirt bike engine from a KTM. That’s certainly a far cry from the seemingly powerless electric motor that comes in one of these things! The end result is something that we can’t help but feast our eyes on. It’s pretty hard to watch something like this without wanting to give it a spin.

Check out exactly how these guys modified this mini Porsche. The machine really has some creative and extensive modification in order to handle the newfound power. While it would be nice to make something simple work, almost all of the original components had to be trashed.

We can tell that this one is already giving you ideas of how to modify your kid’s Power Wheels. All that we have to say is that we’re not responsible! We would love to see the videos of the outcome, though! – Grind Hard Plumbing Co.