The 1996 book, “Into the Wild” told the true story of Christopher McCandless. McCandless was the son of wealthy parents who graduated from college as a top student. Naturally, such a person would seem to have endless opportunities in front of them. However, McCandless decided to forfeit the pursuit of money. Instead, he would give away his savings to charity, get rid of his possessions, and set out on a journey to the Alaskan wilderness.

McCandless was ill-prepared for the road ahead and was said to have died of a combination of starvation and food poisoning. He would pass away on a bus in the woods.

In the movie, out of respect for Christopher, the real bus would be replaced with a set. Most of the movie was shot on location, though.

As the bus from the story would skyrocket in popularity, it would eventually become a heavily traveled tourist attraction. Naturally, as it was deep in the Alaskan wilderness, this began to raise a safety concern. There are several stories circulating about people who have died trying to find the bus.

In response to the rising curiosity, the Alaska National Guard removed bus from its location to prevent any further danger. With the help of a CH-47 Chinook helicopter, the bus would be lifted from its resting place.

The exact destination of the bus is yet to be determined. However, it’s said to be headed to a “safe location” where we’re sure that it’ll be much more easily accessible for tourists.

Jalopnik reports that “The bus, a 1946 International Harvester which originally belonged to the Fairbanks public transit system, had been stationed in the wilderness to be used as a shelter for construction workers building a road in the region. When the road was finished, the bus remained in the woods abandoned.” 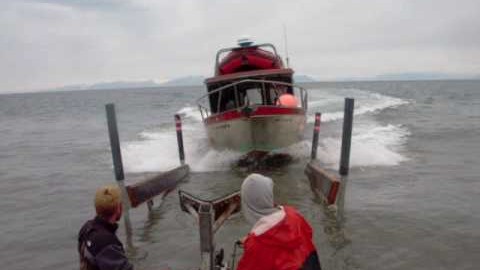