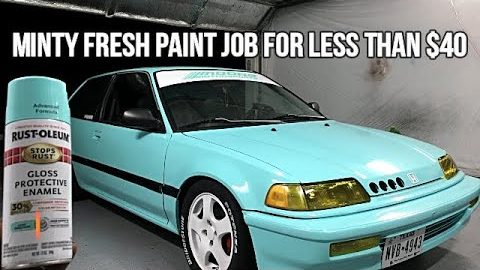 For different jobs, there are definitely different budgets. For example, if someone has a Ferrari that maybe has a couple of scratches, they likely aren’t going to break out a spray can. However, if you have an old Honda that you don’t want to dump a bunch of money into, maybe a spray can get the job done.

When we even bring up the concept of a rattle can, it might make some peoples’ stomachs churn. However, on several occasions around the web, we have actually found individuals who have used a rattle can and have gotten pretty good results. Believe it or not, there are actually several different ways to be able to lay down such a paint job to make it come out as good as possible. Just because you’re on a budget doesn’t mean that you want to sacrifice results if it’s possible to shoot for the moon.

This time, we check out a paint job on a Honda Civic that was done for less than $40 and actually came out looking pretty clean. The creator of this video, Moore Motorsports James Dguy on YouTube, used Rustoleum’s advanced formula to spray down the car and he seems to be pretty happy with the results. From what we gather, if you can find this can in stores, it will supposedly provide more high-performance outdoor color over a longer time period.

At the end of the day, it doesn’t seem as if this paint was particularly made for cars. However, it’s sometimes the place that your least looking that will find the best result. This is definitely a philosophy that we have seen come to life over and over again in all areas of the garage. Could it potentially play true in the painting arena as well?

« Synthetic Fuels Could be the Thing to Save Gasoline Powered Cars