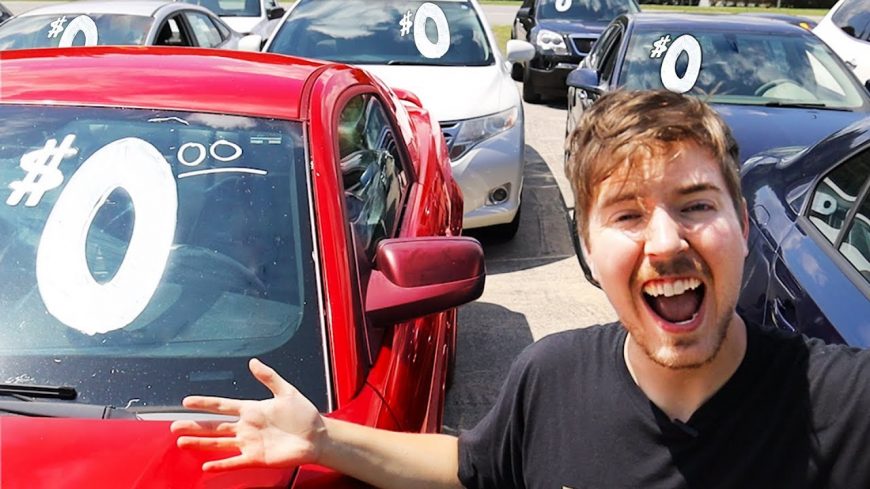 When it comes to car dealers, they sometimes have a way of making people hate them. It’s pretty hard to walk into one of these establishments and expect an honest experience where someone is trying to give out the best deal. Instead, it always seems like salespeople with their own hidden intentions want to trick everybody into throwing their hard-earned money around.

On the other hand, we run into guys like Mr. Beast. He seems to be almost the opposite of what a car salesman is all about. Not only does this guy create some of the most viral videos on the internet. He also gives away large sums of cash. Beast has been known to give away tens of thousands of dollars at a time. This time, he’s claiming to giveaway over a hundred thousand dollars worth of free cars.

Many of his YouTube channel’s ideas revolve around similar concepts. Each has its own very unique set of nuances, though, that make the videos a blast to watch. This time, he did something that not too many people have ever done. In fact, he might be the first-ever to pull off a stunt of this sort.

When Mr. Beast originally reached out to the car dealership in question, they probably weren’t expecting such a call. After purchasing the entire lot worth of cars, he would end up giving them all away. As he tried to get people to come into the dealership, the would-be customers were surprised to hear that the cars just purchased for thousands of dollars were now marked down. The highest price on the lot would be the grand sum of $13. Some of them even came with the owner being able to take home a couple hundred dollars or more along with the car.

I’m not sure that there is a better car dealership experience that going home with a new car and a pocket full of cash!