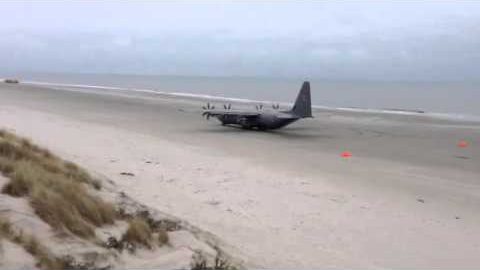 Now, I wouldn’t necessarily consider myself any sort of expert when it comes to the field of aviation, however, I’d be so inclined to think that seeing airplanes take off from the beach probably isn’t something that you come across all that often. This time, however, that’s the exact site that we are being exposed to and someone thought that it was interesting enough to pull out their phone and record all the action so here we are, watching this scenario that doesn’t seem to make much sense as it unfolds in front of our eyes.

We have lots of questions about this one as we are left the wonder exactly how such a plane is able to get rolling on such a surface and why it was there in the first place. An educated guess in the matter would say that it probably had gotten stranded and was forced to make a landing somewhere that wasn’t scheduled to. When the beach presented itself as the only option to take off, maybe they just decided that it needed to happen that way and they were left to get down to business. The result is something that will certainly have the ability make you stop and stare, that’s for sure.

Follow along in the video below and you’ll be able to see the moment for yourself as this monstrous C130 Hercules manages a beach take-off that we would consider to be quite impressive. After checking out the video below, Be sure to tell us what you think of this take off from the beach and if you can manage to make sense of it all. Seeing a plane in such a situation is kind of a mind-boggling experience that might lead you to wonder a little bit more about the backstory.