Can You Make A Tank Fly? This Cardboard Tank Flew Just Fine! 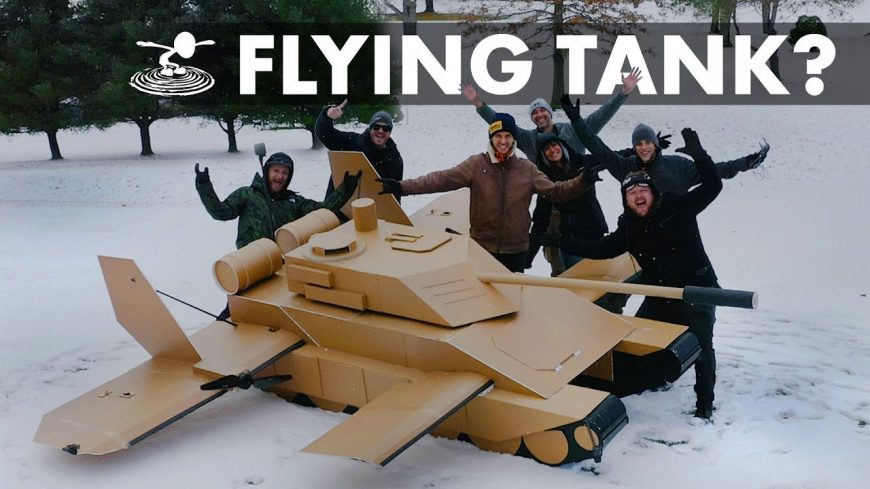 When I heard about this video from the guys in the office, I immediately got a mental image of some past projects I’ve seen. Those others were smaller projects, and while they were just as random as a flying tank, they weren’t nearly as impressive as this because anything will fly if you give it enough thrust. This tank, however, is so big that it actually required some aeronautical engineering.

It may be made of cardboard, but you can tell this massive winged tank is still very heavy, which means it will need all of the power the two prop engines can muster to get it airborne. It becomes clear pretty quickly, though, that the Flite Test guys have done their homework, as the tank moves under its own power very easily.

Once the FT team has the tank in position, on the conveniently snowy runway, they throttle up and watch in awe as their massive labor of love takes flight for the very first time. I can’t deny it’s a sight to behold, the monstrous cardboard creation soaring almost effortlessly into the sky.

Perhaps even more surprising is how well it flies. As the pilot makes a couple of soaring laps around the airfield and gets a feel for the flight characteristics, he exhibits extreme control over the tank, becoming so comfortable with it that he actually attempts a couple of mid-air stunts. The first trick is called a wing over, which is described as “… left or right 180-degree tight turn at the top of an upward quarter loop.”

The tank handles the maneuver easily and gives the pilot the confidence to try a flat spin. If you’ve ever seen Top Gun, you know an unintentional flat spin occurred after Maverick flew through the jet wash of another jet, ultimately leading to the death of Goose. Needless to say, I wasn’t exactly excited about seeing this stunt, but the pilot nailed it and recovered from it, perfectly.

Just sit back and watch for yourself as this awesome creation takes to the skies, it is truly something to see!

« Under the Hood Of Bobby Ducote’s Third Gen Pontiac