If there’s one thing that is oddly attractive and draws in our attention to the ...

If there’s one thing that is oddly attractive and draws in our attention to the point where we can’t get our eyes away from the television screen, it would definitely have to be a good old fashioned car chase. With all the right elements in place, a car chase can prove to be something that could draw in the attention of just about anybody. Heck, if you think about it on the grand scale, pretty much everybody who was alive at the time of the O.J. Simpson chase can remember exactly where they were when it all went down. It was one of those things where you just couldn’t look away from what was happening.

This time, we take a look at another car chase at has quite the volatile set of elements that come together to really leave you scratching your head in another series of events that you simply can’t look away from. I’m not sure exactly what this driver was thinking or why he was trying to run away from his tail here but what did end up happening was that the car would plow its way straight into what appears to be an airport, looking for all sorts of ways to duck and dodge around the obstacles as the driver would try to make his way out the other side before being apprehended.

It looks like the car would make it all the way through the airport, in this scene that looks like it’s straight out of a movie, before busting out of the other side and eventually running out of steam as the car appears to stall out when the tail of people end up catching up with it. After all of that effort and what we’re sure was at least six figures in damage, all that would stand between this car and escaping was the open road but just at the wrong time for this driver, car troubles would leave him stranded with a whole angry mob behind him that he would soon have to face.

Passed Out Drunk Guy Blows up his Car! 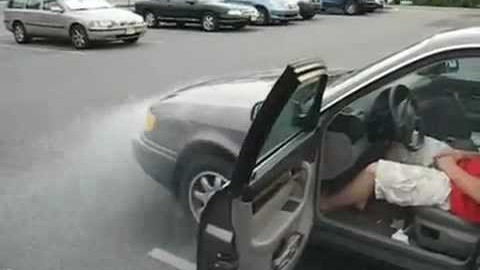