What’s Better Than Carnage on a Skid Pad? (Compilation) 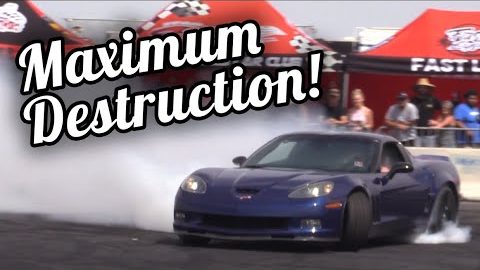 In most forms of motorsports, drivers would probably prefer to keep their cars in one piece. For those thinking that this is a no-brainer, there’re actually some forms of competitive driving that operate under a different mindset. When it comes time for the skidpad, sometimes, drivers might not be aiming for catastrophe. However, most will accept it with arms wide open if it should fall into their laps. On the other hand, there are tons of competitors on the pad who are going for broke. In the name of putting on a show, they’ll do all that they can, even if it means grenading a couple of parts on their vehicle.

This time, we follow along to quite the scene that shows off a compilation of these epic moments on the pad. Some of these drivers are shredding tires until they end up exploding. Even after said explosion, some aren’t ready to quit just yet. It’s pretty crazy to watch as pieces of tire fly everywhere and take out body parts. One car even lost its rear bumper in the pursuit of the ultimate sideshow. We really have to appreciate the dedication that goes into putting on a show like this. Lots of people are willing to work lots of hard hours just to go out there and destroy things.

By following along with the BigKleib34 video below, we dial into Holley LS Fest West as the burnouts are taken to a whole new level. For those who have never seen a skid pad, it’s definitely something to see! By checking out this display, we get the feeling that most will be caught right up to speed. It’s about time that we here in America take on this epic tradition. After all, it has been a part of Australian heritage for years.