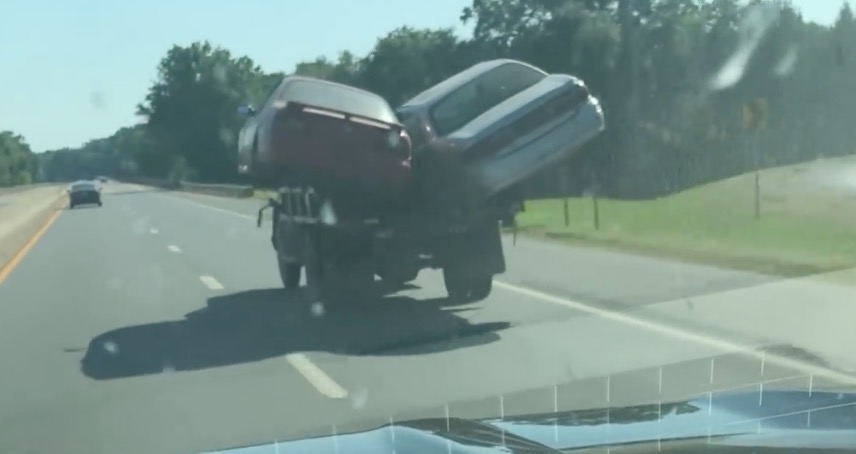 As the old expression goes, “Where there’s a will there’s a way.” Over the years, we’re sure that this set of words has probably helped some people to really pick themselves up by their bootstraps and push their way through a variety of different adverse situations. However, sometimes, maybe they it shouldn’t have. Just because you want to do something doesn’t necessarily mean that it’s the safest or smartest thing in the world if you’re able to execute it. In a situation like this, I think that we get an inside look at what exactly one of those situations looks like.

Now, from the video, it’s a little bit hard to tell but it would appear as if the individual pictured here is driving none other than a dump truck. Now, I wouldn’t cite myself as a hauling professional even though I have done my fair share of pulling cars around, but I would venture to think that a dump truck isn’t necessarily the best way to get a pair of cars down the highway if you have to tow them. However, that doesn’t appear to stop this driver from trying it out anyway as he stacks them on back of the truck right next to each other and has at it.

If you care to follow along with the video below, you’ll be able to see the scene as apparently somebody pulled out their camera to record this obscure event as a witness it all unfolding in front of them on the highway. I guess that after watching this one, it looks like the trucker was probably able to make his way to his destination without a hitch, however, but we have to admit that this probably isn’t a method that we would recommend for any of you to try for yourselves.

« Simple Demonstration Shows How Dangerous the Wrong Trailer Load Can Be