Caught on Camera – Cyclist Runs into Angry Bear While Speeding Down a Trail, Bails into Bushes 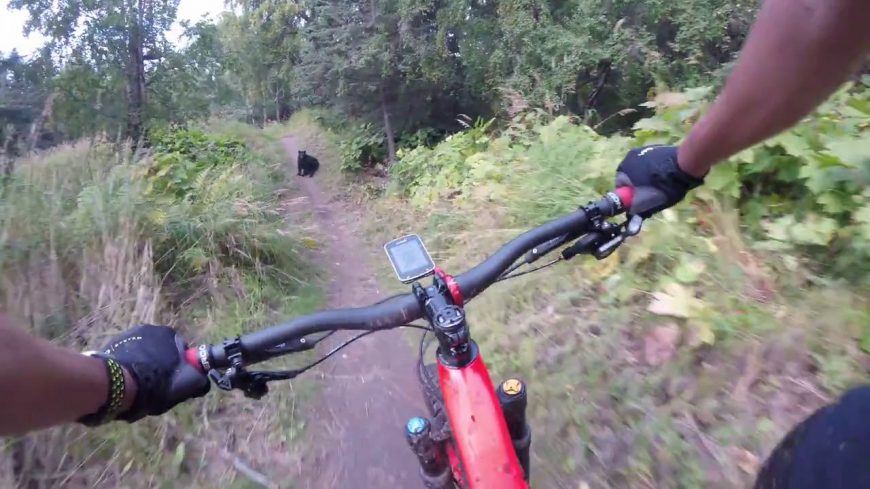 When it comes the hobbies that can be a lot of fun and help you keep in shape, riding a mountain bike might be a good pastime to consider, however, as this rider would soon find out, sometimes, when you are out and about on the trails, you might have an unexpected situation pop up. No, we’re not talking about a random log in your way or perhaps a slippery slick of mud that will send you onto the ground. Instead, what we are looking at here, is an unwelcome visitor that was sitting right in the middle of this rider’s path and would cause quite the fit of mayhem.

This time, as a rider was getting together quite a head of steam, he came around the corner where he would find a bear sitting right in his way! The second that he saw the potentially dangerous animal, he would lock up the brakes on his bike, throwing himself on his side and falling into some bushes with the hopes that the bear wasn’t aggressive and didn’t see him. This is where the camera cuts off so we would be forced to think that he did make it home alright after this close encounter since the video made it to the web and all. Either that or somebody was stumbling around and found a GoPro sitting amongst the pile of bones (We’re kidding of course).

Follow along down in the video below that will attach you to this rider’s helmet and allow you to see the shocking moment that popped up right in front of him. That most certainly is about the last thing than he expected but when it happened, he had to act quickly! Looking back on this one, he’s probably laughing now, but in the heat of the situation, that probably had to be quite the scary set of circumstances.

« How in the World Did This Woman Survive Such a Brutal Car Accident? She Even Called The Ambulance Herself!