If you happen to be a gearhead, you definitely know that the need for speed, that ...

If you happen to be a gearhead, you definitely know that the need for speed, that feeling you get when you hop behind the wheel and just want to lay into that accelerator to give that automobile that you’re behind the wheel of the best that you’ve got, stretching it out and getting that fill of your craving for adrenaline. You look for an absolute blast and as it turns out, there are pretty much no limits on what exactly people will power through with to satisfy this need for speed, even when it comes to vehicles that don’t seem so fit for the job.

In this one, we check out the very theory that people race absolutely anything. What’s pictured here isn’t necessarily a sports car or even something that somebody modified to go fast but instead, a couple delivery trucks, soda delivery trucks to be more exact. Believe it or not, the truck don’t appear to have just run into each other out on the highway and had excited drivers who want to lay into the throttle for a little bit of friendly competition when nobody was looking but instead, have set up a side-by-side dig race that might just have their bosses looking at them funny.

No reports have been made to if either of these drivers ended up being caught up in any sort of trouble for this kind of activity, however, it does end up being pretty hilarious to watch for these delivery vehicles going at one another in a good old-fashioned drag race. It looks like they might have even set this one up right in the very industrial park where they deliver soda from. I guess that you could say this might be the beginning of a budding rivalry between a couple of soda companies. Who knows?

After midnight no rules

Semi Truck Drag Racing Might Be The Most Badass Thing Ever! 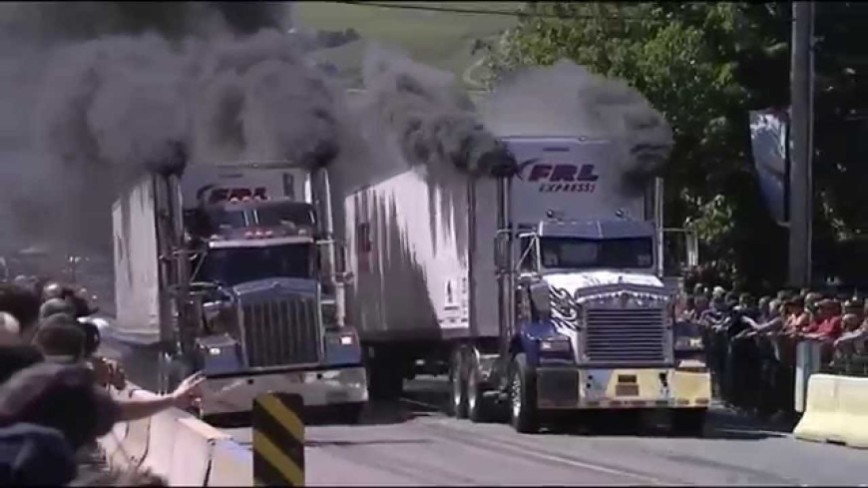