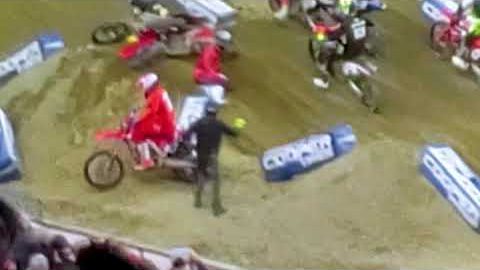 Two time AMA Supercross world champion Chad Reed’s 2019 season has come to a devastating end after this hard crash at the tour’s most recent stop in Seattle. You can see in the video below, Reed mistimed his run through the rhythm section in heavy traffic and was tossed from his bike. However, it wasn’t the fall that ended Reed’s season.

As Reed landed, the bike of #11 Kyle Chisolm quite literally landed right on top of Reed’s ribcage, pinning him between the dirt and several hundred pounds of bike and rider. As you might imagine, the ribs don’t take too kindly to dirt bike tires, and Reed was left with 8 broken ribs, a broken collarbone and a collapsed lung. You can actually see the panic on Reed’s face as he calls for medical attention immediately following the impact.
Having just turned 36, many see to think this could be the end not only Reed’s season, but his riding career. It’s no secret that the body takes longer to recover as we get older and these are some pretty significant injuries.

Of course, Reed is touch, having crashed hard and came back many times throughout his storied nearly two-decade long career, so only time and Reed’s doctors will tell if he’s able to return.
As one of the winningest active riders in the Supercross world, Reed has captured 44 premier wins and two world titles, as well as the most podium finishes in SX history. He’s one of just three international riders to win the SX world championship and the only international rider to win both 450 and 250 world championships. He is tied for the longest career in the sport, and may fight his way back to competition for the 2020 season just to lay claim to that distinction.

If it weren’t for Ricky Carmicheal and Bubba Steward, Chad Reed would likely be the most successful SX racer in history, as he finished second or 3rd to those two countless times throughout his career.