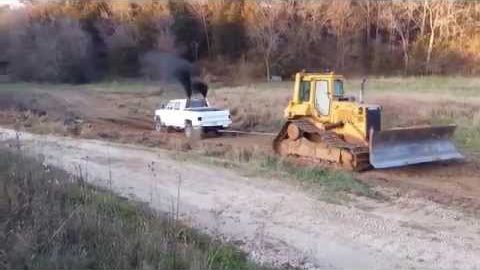 We aren’t exactly sure if these two were supposed to be participating in a tug-of-war or if this Cummins swapped Chevrolet pickup truck was simply towing this bulldozer, but either way we’re impressed.

That dozer has to weigh a few tons, but this diesel truck is more than confident in its abilities to strap up and move the monster a couple of yards.

Black smoke goes everywhere as the pickup uses all of its might to move this rock solid heavy equipment to where it needs to be.

Check out the video below that shows off the strength of a good old diesel engine. Just remember, black smoke don’t mean it’s broke!

« Mechanic Explains Why You Should Never Overfill Your Gas Tank