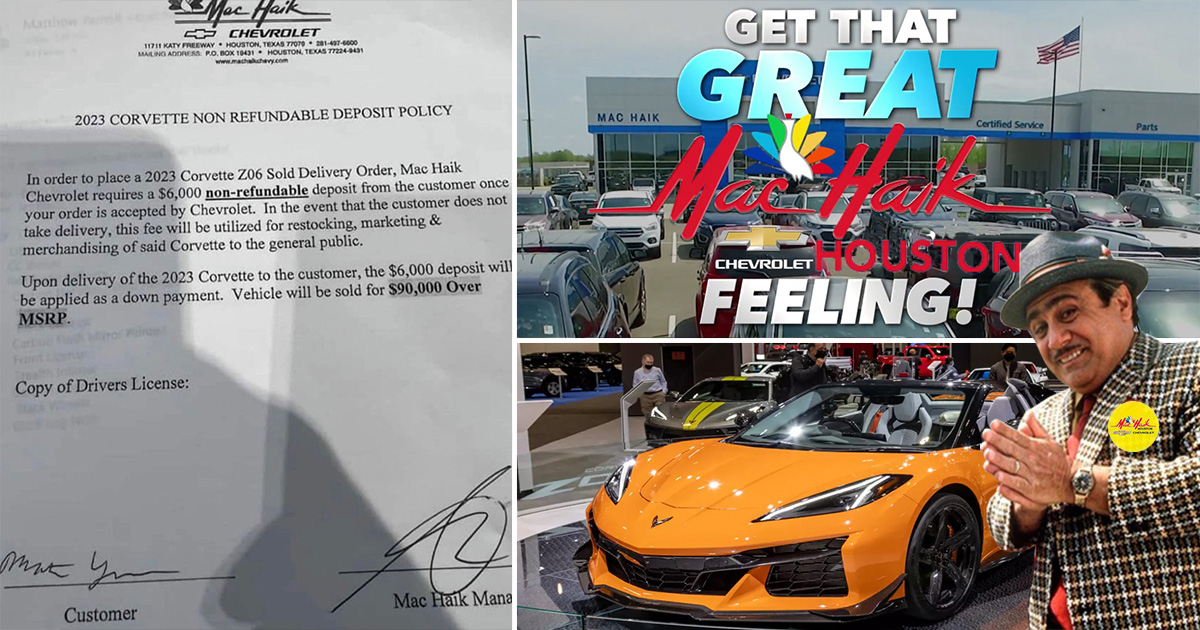 If you’ve been a part of the American economy for the past couple of years, you’ve probably noticed that things aren’t exactly what we all used to know as “normal.”

With supply chain shortages, many industries have seen massive price hikes. One of the industries that hits closest to home is the automotive industry. With the way COVID shifted the world on its axis, lots of things are getting expensive. With these shortages, vehicle prices have soared higher than ever before.

While dealership markup on rare models isn’t necessarily anything new, we definitely have to say that we have never seen things escalate to the level that the industry has taken them these days.

In a post that has recently gone viral on several different outlets on social media, it appears as if a letter from Mac Haik Chevrolet out of Houston has the dealership charging quite a pretty penny to mark up the 2023 Chevrolet Corvette Z06.

With that in mind, though, sometimes looks can be deceiving.

The letter states that in order to place a delivery order for the new Corvette, there is a required $6000 nonrefundable deposit. While the deposit might hard to swallow, having some skin in the game is understandable when you’re ordering a specific Corvette that’s tailored to your specifications. The letter also mentions that if the customer doesn’t take delivery, the fee will be used for restocking, marketing, and merchandising the car so that the dealership can sell it to somebody else. Fair enough.

The part of the letter that seemed to catch the eye of the general public, though, was the next part where there was mention of a markup. Let’s face it, paying over MSRP is a part of the game these days but if such a letter were legitimate, paying some $90,000 over the sticker price would be something that could make one’s eyes pop from their skull.

We reached out to the dealer and spoke to a salesperson who wasn’t familiar with any markup. He told us that Mac Haik Chevrolet is selling its Corvettes at MSRP.

Update: It appears as if the dealership’s General Manager took to Facebook to correct the matter. A new release shows the page saying “We apologize for the issues we caused. We are contacting all customers that have ordered the car and lowering the price to MSRP.”

We also spotted the GM on a local Corvette group saying “We didn’t intend to cause problems. We sold Stingrays at MSRP and customers flipped them so we decided to sell the Z06 over MSRP. I understand and agree with how everyone feels.”

« NBA Player Picks up Hellcat Fused Chrysler 300 That is CLEAN!