For those trying to make YouTube gold, some perfectly good things might have to be sacrificed. When it comes to YouTube users who make automotive content, more often than not, they view their vehicles purchased as an investment. That certainly appears to be the line of thinking behind the WhistlinDiesel YouTube channel. Hundreds of thousands of viewers have watched as they have sacrificed all sorts of usable diesel trucks. Most notably, they seem to be interested in Duramax powered vehicles.

This time, we see more of the same from the channel as they are taking on an all-new high. In this one, they’re taking durability testing to a different area entirely. Normally, when we think “durability testing,” we think of pushing an engine to the limits in a mechanical sense. This might mean pulling a heavy load or taking it down the drag strip hundreds of times. With this one, though, let’s just say that things get rather explosive.

With a Duramax powered test mule in hand, the channel had created an interesting go-kart of sorts. However, it appears as if they got bored with that concept and have since moved on. In the latest video, a load of Tannerite is fastened to the remnants of the old Silverado. For those unfamiliar, Tannerite is essentially an explosive that combusts when struck with a bullet.

It doesn’t necessarily take a YouTube expert to see where this is all going. When push comes to shove, eventually, the Tannerite explodes and sends shrapnel everywhere. Up next is seeing if the Duramax dares to function after the blow. They did manage to get the truck to fire up after the explosion. Would it be able to move under its own power, still, though? That’s for you to find out in the video down below. 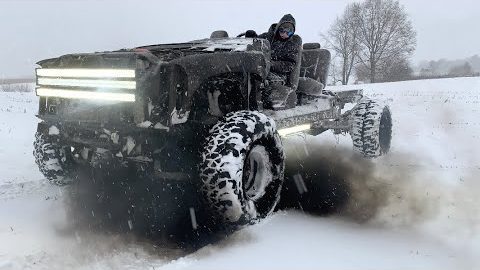