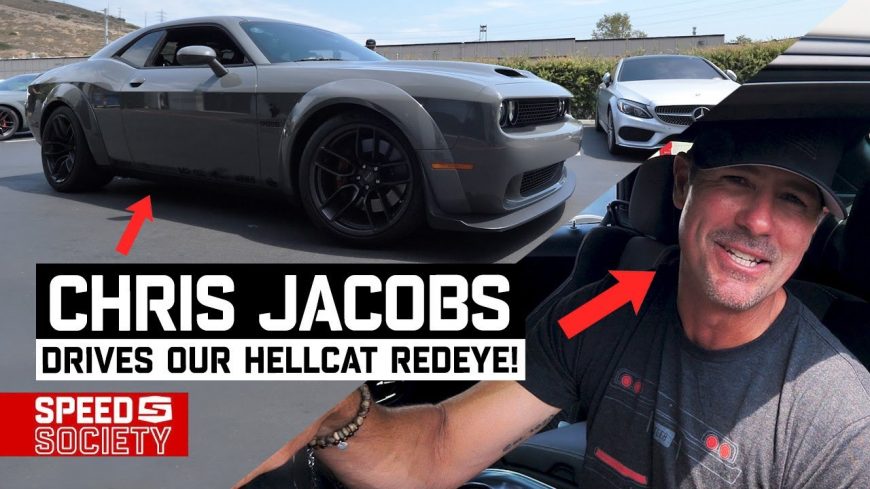 As a cast member of Overhaulin’, we would probably tend to say that someone like Chris Jacobs knows his cars. After having gone through a variety of them on the show and plenty of others through other automotive ventures, this guy knows cars inside and out. Therefore, we thought it would be fun to get him to come out to Speed Society headquarters to put his stamp of approval on our most recent giveaway machine.

For those who haven’t been acquainted, the latest giveaway was an 1100 hp Dodge Challenger Hellcat Redeye. We’re sorry to get your hopes up but the entry period for this bad boy has closed and the winner will be announced within the week. However, the pre-entry period allows you to get 10x entries on our next giveaway machine. You can see how to get involved in that by clicking here.

As far as the Redeye, though, we’re not done drolling over it yet. The machine Boasts Forza tuning’s “Stage Four” package to really get things going. Out of the box, we thought this car was absolutely amazing. However, a couple of nice touches really bring it to an all-new level.

When he came to check out the car, Jacobs showed up at Speed Society headquarters in a regular Hellcat Redeye that wasn’t modified at all. With that, we actually had a pretty fun time being able to compare the cars and check out some of the differences. Sure, watching videos side-by-side might allow someone to get somewhat of an idea of the difference. However, having both of the cars next to each other really shows just how much intensity was added to the modified version of the car.

Last but not least, of course, Chris had to head out and see what the car was all about. When he got behind the wheel himself, we think that he was definitely impressed. Heck, he even said so!

By following along with the video below, you’ll be able to immerse yourself in the action and see his reaction for yourself!