Clash Of The Titans: Dodge Demon Vs Ford GT – Half Mile Throwdown 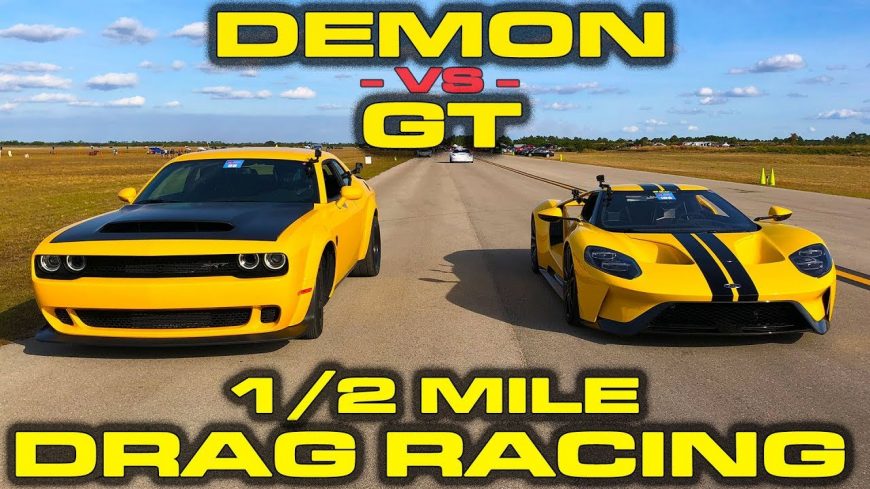 Among the four-wheeled machines out there that really know how to turn that intensity dial up, there are some that really cement themselves as fan favorites. Among those cars, we think that there is almost unanimous agreement with the idea that the Dodge Demon and Ford GT have risen to the top of the charts. While both of these are performance machines that are American-made, it doesn’t necessarily take an engineer to explain that these are two very different cars that would excel at very different forms of performance. In fact, there isn’t much that they do share.

On one hand, we have the Ford GT which has been developed from decades upon decades of performance heritage around the track. The car might not be as powerful as the Demon as it cranks out 647 twin turbocharged ponies but certainly has a weight advantage along with the suspension that is set to kill no matter what kind of curves are thrown in its way.

On the other hand, another car comes into the picture that is also built from an incredible heritage, except this time, it’s a  drag racing heritage. For those who haven’t been filled in just yet, the Demon which is essentially a machine born to drag race, is a machine that boasts over 800 hp, 840 to be exact. We would argue that the car’s skill set is specially tailored to the eighth mile and quarter mile applications.

In the video below, we get to go along for the ride as both of these cars are put into half mile competition with the help of Wannagofast. We would argue that neither of these machines is specifically tailored for the half mile but it’s still incredibly interesting to see which one of these cars is able to tap into their skill set most effectively to tackle such a surface, even if they’re striking out of their wheelhouse.