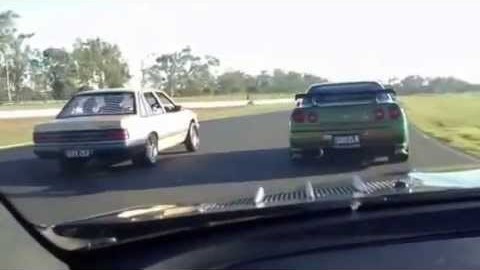 When it comes to racing, the Nissan GT-R has always proven to be a measuring stick for speed, whether it come in the form of an R34 or R35.

This time, it’s GODZLR, an R34 car that finds itself on a straightaway right next to a Holden Commodore that looks like it’s relatively harmless.

The looks of this thing couldn’t be any further from the truth, though, as the Holden has a little something under the hood for all potential challengers that it may find itself up against, including this Skyline.

Check out the video below as the two line up next to each other and take off. At the end of the race, many are probably left wondering what even just happened!

Check out the clip below that puts a 1250hp Lambo up against a Bugatti.

« Angry Citizen Tries To Pull Over Cop For Not Wearing Seat Belt!