When it comes to drag racing, the variety of cars at the track can really be ...

When it comes to drag racing, the variety of cars at the track can really be mind-blowing. Some of them are definitely more expected than others. However, there are a group of machines that go out there and do things that we certainly wouldn’t believe.

One of the first things that we couldn’t help but notice about this particular Terminator was that it is a convertible. Racing convertibles isn’t unheard of. there have been some people who have dared to take on the challenge. However, it certainly is a lot rarer to see a drop-top tackling the drag strip. It’s undeniable that the design holds the car back from the start.

The car’s uncommon nature wouldn’t stop this Cobra owner from going on a journey to make the convertible fast. He tells us that his wife wasn’t so comfortable with having her husband behind the handlebars of a fast motorcycle. Therefore, he would oblige and build a fast car instead.

As fate would have it, the Cobra would end up getting pretty serious, indeed. In place of the original modular four-valve v8, we find a Coyote powerplant instead. This is certainly a brave swap as the original combination in this car is highly sought after. We’re sure that it provides quite a bit of controversy in the Mustang community. However, when all the cards fall where they may, it’s kind of hard argue with the results here. The twin-turbocharged machine is quite the head-turner on race day.

By following along with the BigKleib34 video below, we’re able to dial ourselves into quite the situation. This Mustang manages to travel to well over 170 mph in the quarter and really stirs the pot in its class. The owner does tell us that he was having some trouble with boost leaking that day. However, this ride was still rather impressive nonetheless. Even with all of the extra weight on board with the convertible, this Mustang isn’t slowing down! 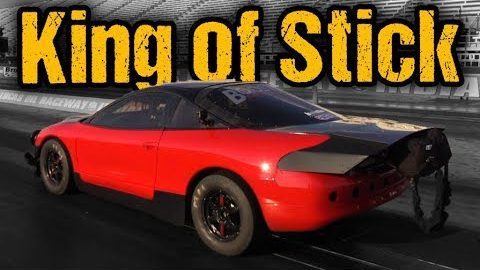