The Coolest Ford Taurus SHO to Ever Exist (Over 1000HP!) 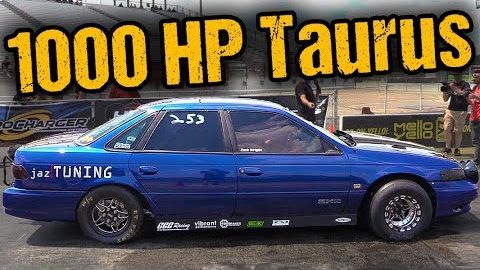 At the beginning of the drag racing journey, a racer has two paths that they could potentially travel.

Path one is tried and true. Obviously, this is the more popular choice as it has way more upside. For he or she who is looking to be competitive, there’s no easier option. With the tried and true, the vehicles are generally cheaper to build. In addition, the know-how is commonly available. With a couple of clicks on the internet, the answer is right at your fingertips.

Option two is the path less traveled. After discussing option one, it almost seems like there’s no upside left for the second option. After all, these cars not only tend to be far more expensive to build but also far more difficult. As is the nature of the beast, the more unique the vehicle, the harder it is to come by parts and knowledge.

For Zach Wright, however, he didn’t really care much for the path of less resistance. Instead, he started with about the most unlikely of drag racing platforms and has evolved it into a true beast of a machine. The car that is affectionately known as the “Blue Turd” started out life as any other Ford Taurus SHO. While the SHO boasted the “sleeper” title with more performance on tap than an average Taurus, the folks who originally put together this platform probably never saw it turning into anything like this.

By following along in the video below, we get to witness a complete transformation. During this weekend at Street Car Takeover Indy, Zach manages to become the first to ever punch a SHO into the 9-second range. We wouldn’t be overly shocked to learn that he’s the last as well. In either scenario, watching this obscure creation come to life is nothing short of pure bliss. Even outside of the appeal of the oddball nature of the car, this thing absolutely RIPS! – BigKleib34