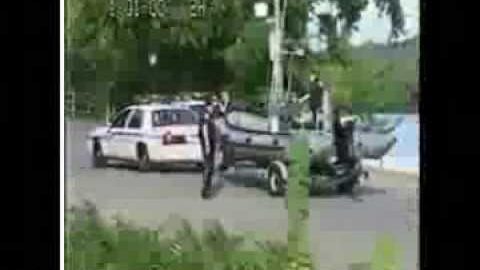 When it comes to the struggles at the boat ramp, we’ve most certainly all have had them in some capacity when learning to launch a boat. However, it turns out that some have had worse luck than others in the process and sometimes, those bloopers are even caught on camera! Not only is it bad enough that you’re never going to be able to live it down with your buddies, but now that it’s been captured on camera and uploaded to the internet, you’re going to have that one tagging along with you for the rest of your life and potentially seen by millions of people – no big deal, right?

This time, the people behind the boat are none other than the police and as they attempt to get their boat launched into the water and unfortunately, they’re greeted with the unfriendly fist of the boat ramp that’s ready to pack a punch to those boaters who aren’t experienced and ready enough to take on all of its challenges. We’ve seen some bad ones, but the battle here gets downright brutal as the trailer detaches from the car almost immediately, sending the boat and trailer rolling down the ramp with someone onboard who is now left to hold on for his life!

Check out the video below as it progresses to get worse from there, all the way to the point where there’s an officer swimming around in the water, trying to pull the trailer back up the boat ramp by hand. While it’s tough to get experience with something like this unless you’re around it, I guess that screwing up this horribly is one way of going about figuring out what not to do. Maybe next time, they’ll be able to figure out how to launch the craft without going for a swim themselves.