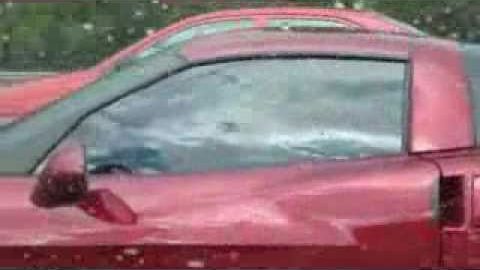 This is hardly a newsflash, but we rarely have such great video proof: Guys do stupid stuff to impress girls!!!

These ladies are cruising down the interstate, minding their own business when the guy beside them in his C6 Corvette decides to flex his testosterone and show out, despite the obvious downpour and other cars around him on the highway. As you can imagine, this was the wrong thing to do, and he very nearly caused a multi-car crash.

Instead, he just made a total ass of himself, sliding quickly to the left right in front of the girls’ vehicle, then sliding all the way across three lanes, ending up in the far right lane, where he hopefully realized how idiotic and dangerous that maneuver was. The poor girls don’t even understand what he was doing, as they questioned whether or not videoing the Vette driver had made him mad. No, girls, he wasn’t mad… He was male.

« Jay Leno Surprises a Deserving Veteran… This WIll Give you Chills