Someone Shoehorned a Coyote Mustang Engine Into a Porsche Cayman

Someone Shoehorned a Coyote Mustang Engine Into a Porsche Cayman

When we take a moment to stop and really think about it, cars are basically just an ...

When we take a moment to stop and really think about it, cars are basically just an extension of what we played with as children. For most of us, we can remember playing with something like LEGOS. We would create structures that cluttered our dreams, bringing creativity to life. We would use our imagination to come up with the best structure that we could possibly build. This could mean a castle or maybe even a cruise ship. As we grew up, many of us grew apart from these different playsets. However, gearheads certainly have found a way to invest themselves in more toys. These might be a little bit more expensive to operate, though.

For many of us who have found our way to car culture, creativity is a must. It’s essentially a way to invest ourselves into vehicles and show off a little bit of who we are. Because of this, at car shows and race tracks around the world, we see all sorts of different combinations. This might be something as simple as adding modifications to something common like a Ford Mustang. On the other hand, though, it might be yanking the motor out of said Mustang and sticking it in a different car entirely. In this video, that’s exactly what we see.

The clip that we get here is rather short, however, the vehicle in question looks like a ton of fun. Normally, with swaps like these, one ends up expecting an LS engine. This time, however, a Porsche Cayman met a Coyote power source pulled from a late model Mustang. By following along with the video below, we get to take a dive into how exactly one managed to shoehorn this V8 into the Porsche. In turn, an extra layer of interesting comes about when we find out that it’s rear mounted. At least the engine placement is reminiscent of what the engineers originally intended. Otherwise, this one is going to have the purists weeping!

Take a Ride in a Hellcat Swapped Miata 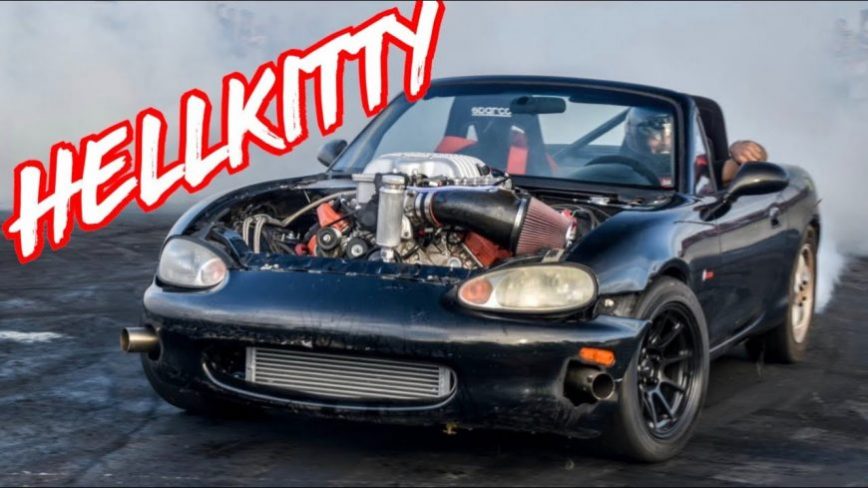