They Crammed a Hellcat Powerplant in a Miata, Created a Tire Shredding Beast 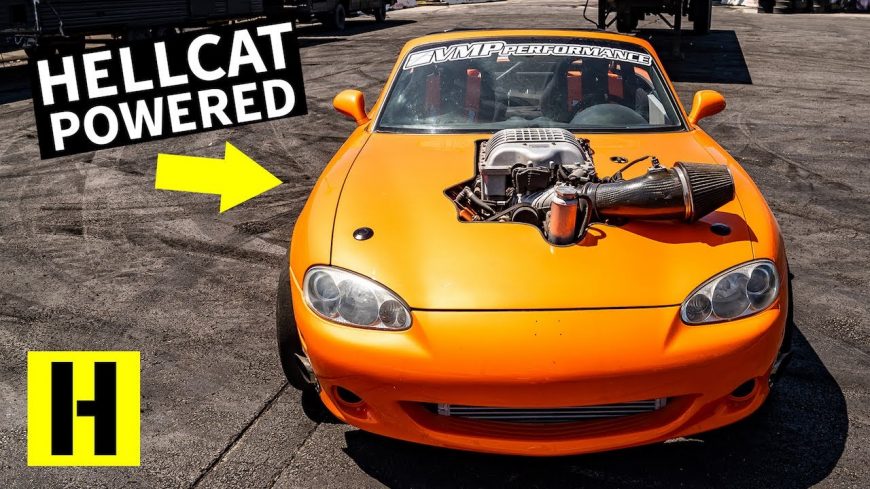 It seems like, in today’s variety of engine swaps, there are no holds barred. No matter what someone’s idea is, with enough chopping and custom fabrication, crazy ideas can come through to reality. We’ve seen everything from the likes of a Mercedes-Benz powered Buick Regal to just about anything that’s the mind can imagine powered by an LS engine. This time, however, we take the time to look over one of the next big trends in engine swap culture. The platform isn’t quite old enough to be as accessible as something like the LS but give it time. We’re ready to see this power plant in everything!

This time, we check out what might be one of the lightest platforms imaginable in a Mazda Miata. Unlike a regular Miata, though,  it’s paired with a little bit of power. The source of the power is the supercharged V-8 that we all know and love, straight from the engine bay of a Hellcat.

For those who thought that over 700 hp was a grand old time in a heavy coupe like Dodge’s Challenger or a sedan like the Charger, just imagine taking that same kind of juice and putting it in something super lightweight. After all, the Miata is nothing short of basically a street legal go-kart.

By following along with the video below, we can drop in on the swap as featured by Hoonigan. This thing has to have taken some major shoe-horning to line up. As one might imagine, carrying out a swap of this nature is going to need a good bit of customization. The modification is certainly aplenty as the big v8 finds just the right spot!

What exactly does it take to fit something like a Hellcat powerplant into a Miata? Well, this time, we find out just that! It’s a pleasure to watch this crazy machine rip! The power to weight ratio here has to be unlike any other!

« $55,000 in Wheels Stolen From Dodge Dealership, Those Poor Challengers!