Crane Tow Truck Breaks a Chain and Drops Car… How Pissed Would You Be?

Crane Tow Truck Breaks a Chain and Drops Car… How Pissed Would You Be?

Naturally, after you find yourself in an accident, afterward comes a time where you ...

Naturally, after you find yourself in an accident, afterward comes a time where you have to clean all of it and make sure that your car gets to where it needs to go, somwhere that isn’t the side of the road. Normally, this job is handled by professionals but this time, the professionals that were called to the scene most certainly didn’t do the cleanest job of getting the VW Touareg in question to the owner’s body shop of choice. In fact, after seeing how they handled the whole thing, I think most people would agree that they did an exceptionally poor job of it.

Normally, what would happen in a situation like this is that the car, after being yanked out of wherever it crashed, would be slowly pulled to the tow truck’s bed. However, this time, what we see instead is the Volkswagen being lifted up into the air by the front-end, dangling above the flatbed before the operator tries to drop it down.This is where the ugliness unfolds as this isn’t exactly the smoothest transaction.

I’m going to go ahead and guess that this car was pretty close to being totaled in the situation and if it wasn’t, well, I would venture to think that now it most certainly is going to be. With a drop like that, I don’t think there’s much coming back at the end of the day. It’s kind of hard to see from that far out exactly what was happening but this might just be something that would leave the owner of a vehicle a little bit red in the face.

Check out the video down below as it takes you on the scene of this awkward towing job andt ell us what you think of the entire situation. Do you think that they just wrote this vehicle off as trash and treated it as such with their haul away efforts?

Chevy Truck With No Clutch vs 2 Rednecks Trailer Loading FAIL!! 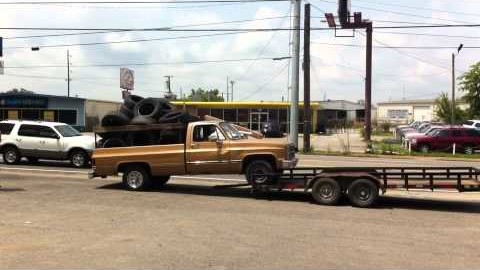