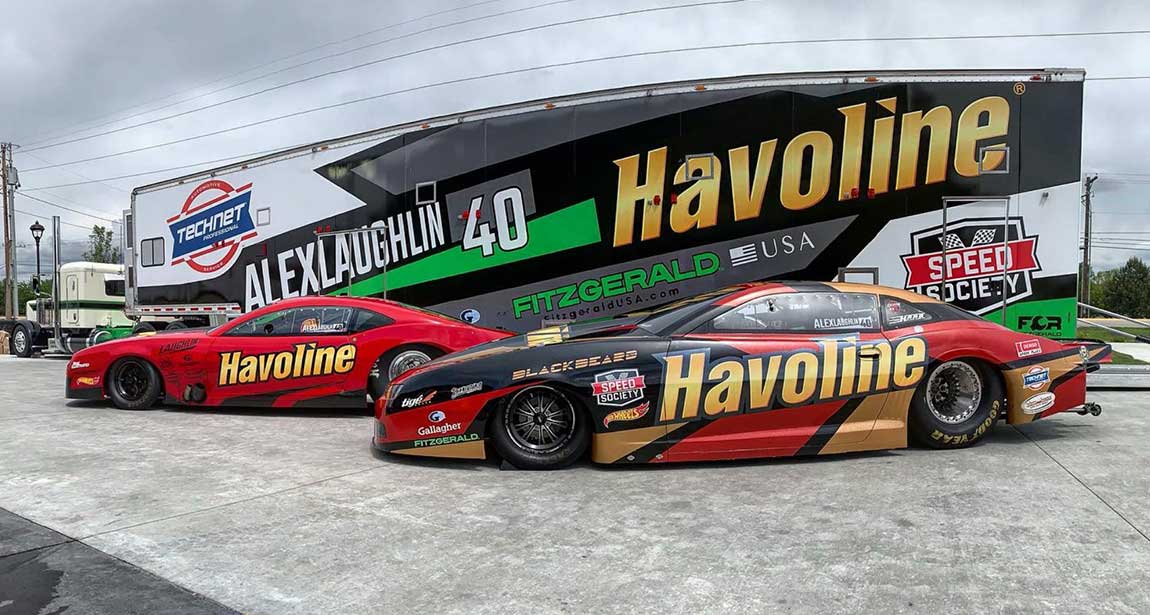 NHRA Pro Stock driver and Speed Society’s good friend, Alex Laughlin, made a splash last year. This came when he announced he would be competing in the pro mod class.

The effort would come with famed tuners Shane Tecklenburg and Justin Elkes tuning the Elite Motorsports operation. So far, Alex had shown a good progression from his first time out with the car heading into this last race at Topeka.

During qualifying, though, Alex would be a part of something that most people in their lives will never see happen. He put 7 rods through the block of his Elite Motorsports Hemi. The guys aren’t 100% certain what caused the issue. However, they believe it was a shortage of oil getting through the motor. The bad luck in Topeka didn’t stop there.

During round 1 of eliminations, Jeremy Ray, pilot of the “Carolina Kingpin,” went for one of the wildest rides we have ever witnessed. In this ride, he almost took out Alex’ teammate, Erica Enders, in the process. This was followed up with Todd Tutterow getting together with Steven Whitely on the big end of the race. Topeka seemed to provide a brutal weekend of racing when the lights finally went dark on the raceway.

During the race, Laughlin left on the longtime pro mod racer and 2018 World Champion, Mike Janis. With an impressive .027, he would chop down the tree in comparison to Janis’s .055. Shortly after the 60-foot, though, the car began to shake violently.

Alex pedaled the car like he has done so many times in the pro stock car before. However, the pro mod shifted as it was programmed to do so at that time.

This took the rear tires from being upset to giving them a ton of gear ratio and multiplication through the transmission. When we add all of this up, it leads to violently losing control.

As that happened Alex’s helmet bounced around off the roll bar padding which caused temporary blurred vision. This would end with Laughlin finding his way into the wall.

The impact didn’t look so bad on TV. In reality, though, it caused a massive amount of damage. It was an amount that Alex couldn’t cover with his personal funding. $30,000 was the final tally! With the next race looming overhead, Alex knew he needed to act fast to acquire the funding. This was to not only get the car repaired but to get it to the track as well. Laughlin acted fast realizing that a check that large would be hard to find.

Surely, a collection of smaller checks would be easier but he had 100 hours to acquire this funding. During that 100 hours, he would also have to get the car ready for Bristol.

Luckily for Alex, he saw the true colors of a good friend, Chase Freeman. Freeman showed that he would do anything to help Alex make the next race.

This even meant spending the night driving somewhere and staying out of town for the week with the car, working on it. Laughlin created a list of assets in which he could offer sponsors to acquire his funding.

The car was delivered to Modern Racing to get the repairs needed to make this weekend’s race at the famed Bristol Motor Speedway. This is the same track Alex won on in Pro Stock.

With sponsors including Hot Wheels, Havoline, Fitzgerald Peterbilt, Fitzgerald Collision and Repair, and Technet Professional, Alex is now on pace to make this weekend’s race at Bristol!

In response to all of the love and support, Alex tells fans “I know a lot of people from The Drag Racing Reality show world think I have unlimited funding, but I truly do not. To have these companies, fans, and friends step up like this means the world to me. I just hope I can show up to Bristol and take a Wally home.”