Posted by: Jeremy Patterson on February 6, 2019 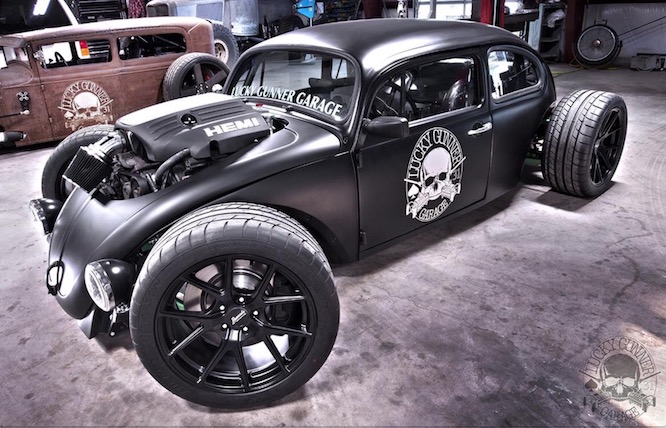 For those of you who have ever wondered, no, a 5.7-liter HEMI will not fit under the hood of a Volkswagen Beetle. However, that doesn’t mean you can’t shoehorn one between the fenders and cut a hole in the hood to make it work!

The guys at Lucky Gunner Garage decided that was exactly what they were going to do, tossing out the stock engine – and rear engine layout as a whole – and building this 1976 Beetle with a HEMI mounted up front and power sent to the rear wheels. We don’t have much more info about the build, or any more actually, but there really isn’t much more that needs to be said.

This is a perfect example of the creativity and skill possessed by the individuals and shops in the automotive community. As a whole, we have the ability to take whatever car we want, a vision for how we think it should be done, and the skills to combine the two to create the car of our dreams. While most might not consider a regular Beetle to be “dream car” worthy, a badass matte black Bug with a trick suspension, wide, athletic stance and the aforementioned HEMI powerplant sticking through the hood is definitely the thing dreams are made of for many people.

This is probably not the most logical place for a diatribe against “the establishment”, but I’m here to tell you, if you’re into cars, or if you enjoy working with your hands to create things, or if you believe you would and just don’t have the skills, kick that whole “I have to go to college” mentality and get out there and learn a trade. Some of the highest-paid people I know never stepped foot on a college campus, the option to go learn how to weld, paint, fabricate, or operate machine shop equipment. These also happen to be some of the happiest people I know because they truly love what they do, and they’re the guys and gals who can envision something like this Beetle and bring that vision to life!