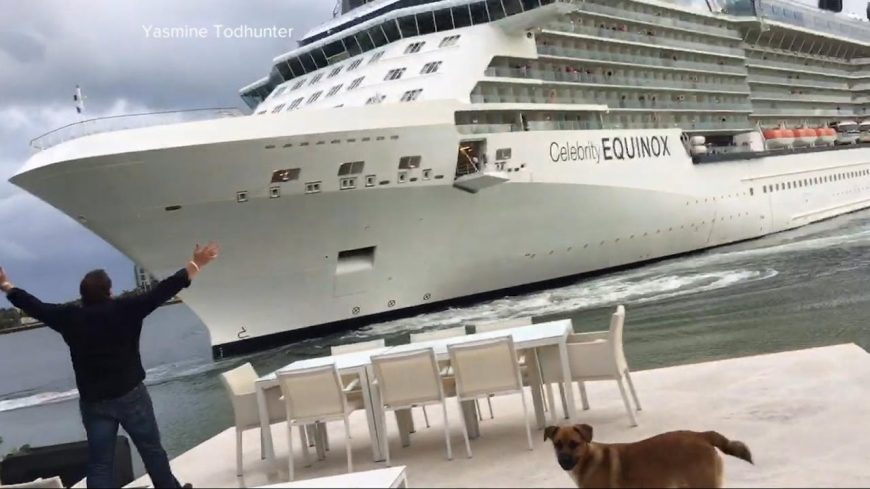 For most, we would consider those two have waterfront homes to be privileged individuals. Living on the water in a place like Ft. Lauderdale, Florida would be a dream for most but for this couple who lived right on the water, their dream almost quickly became a nightmare,  or at least that’s what they thought. Whether or not they were right is up for discussion but one thing is for certain – What they saw when they looked out their window on this day was probably pretty terrifying, to say the least.

As the couple had made their way out to their porch with their two dogs, they would discover that a massive cruise ship was heading straight for their house! When they made this discovery, they would  begin screaming and waving in an attempt to get the ship to alter its course, hoping that the captain would notice in time and not plow straight through their house. I’m not sure about you, but I don’t think a cruise ship making its way through my living room is in my renovation plans anytime soon.

Thankfully, the would throw its thrusters in reverse, causing it to sit still and stay perched away from the home. While it certainly looked like a close call, industry authorities from the Port Everglades Pilots Association would say that the captain was perfectly within range of what he was supposed to do as he had altered the course due to bad weather conditions. They continue that the ship might have looked like it was coming close to impact but, in reality, they say the captain was doing exactly what he was supposed to and had the vessel under control the whole time.

Check out the video below to see just how close this cruise ship came to the Florida home and tell us what you would be thinking if you were the homeowner here. Even if nothing was going to happen in this situation, it’s most certainly something that would be plenty of cause for alarm!