Crushing Anvil With a Hydraulic Press

Crushing Anvil With a Hydraulic Press

Just when we thought that the hydraulic press trend was over, out came another video ...

Just when we thought that the hydraulic press trend was over, out came another video that had us watching with undivided attention as the strength of the press would go up against yet another object that didn’t really seem like it was going to be able to be crushed even with the immense pressure asserted by this machine.

Up on the chopping block, this time, is none other than an anvil that has been built with the sole purpose in mind of being able to take on the pressure to help form metal. It really looks like a good battle is about to unfold in front of our eyes. Afterward, we also get to see what happens when the likes of a hammer, another instrument that’s designed to take some big-time force, goes up against the jaws of the hydraulic press.

Ride along with this experimentation down the video below that takes these objects to the next level, attempting to put all kinds of pressure on them to see if they will shatter to bits. This one is pretty dangerous because if either of these things succumbs to the pressure, they will more than likely shoot shrapnel all over the place! That’s exactly why the press channel has built their own inch-thick safety wall and you shouldn’t try this at home!

Crushing Power Tools with a Hydraulic Press While They are Running 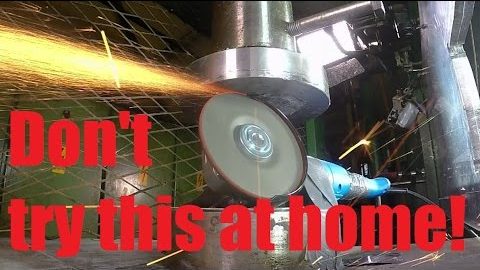