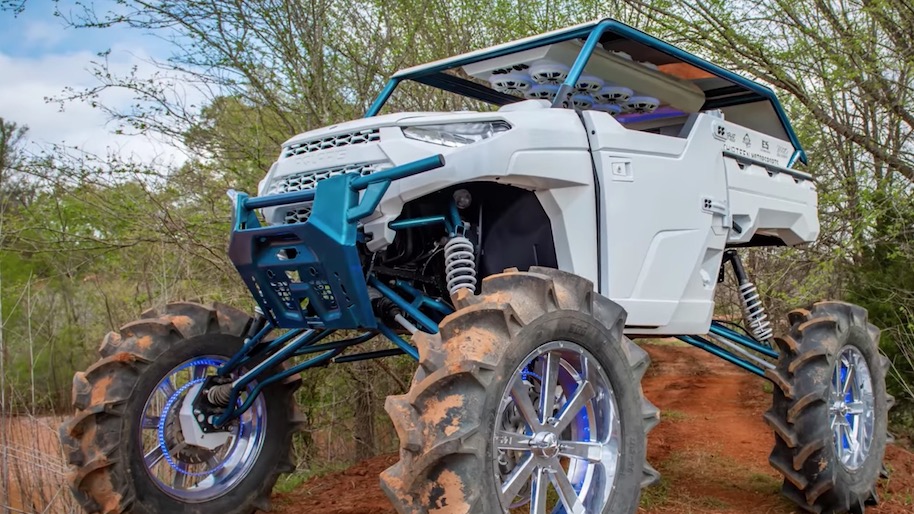 Whether it’s used as a workhorse, a vehicle aimed at getting around the race track in the pits, or some sort of off-road pleasure craft, the Polaris Ranger seems to be a popular option in terms of providing a rugged and reliable vehicle to help get you around. In its stock format, it seems to be a machine that could provide lots of utility and even a little bit of fun if you really want to lay your foot into the throttle, however, that doesn’t stop plenty of people from putting their very own custom touch on the ride, making it their own and potentially tailoring it to be a little bit better to suit their needs.

As it turns out, in this particular case, the man who got his hands on this Ranger decided that he wanted upgrade it in pretty much every way that he possibly could. Not only is this Polaris Ranger 1000 equipped to now hangle rougher terrain thanks to a custom suspension and bigger tires but it’s also become quite the show vehicle as it looks nothing like its former self, receiving everything from custom seating to a stereo system and even powder coating to make the look complete. To be honest, even though it is equipped with enough equipment to go off-road and handle the elements nicely, we would almost feel bad to soil such a clean machine.

If you follow along with the video below, you’ll be able to learn all about this insane Polaris as it has pretty much every upgrade in the book. After they’re done with this thing, it would probably be almost impossible for the people of the Polaris dealership where it was sold to recognize it. If you were to go over this thing with a fine tooth comb, more often than not, the parts that you come across would be something that had been altered in comparison to how it came from the factory.