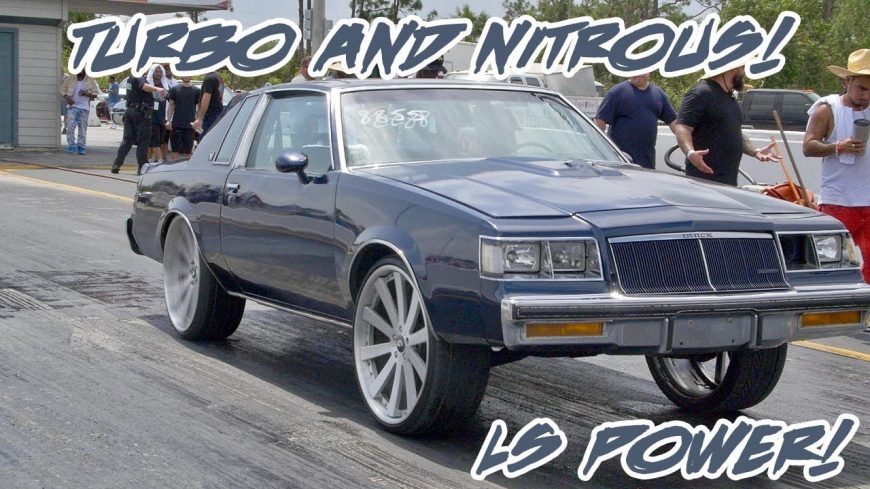 Palm Beach International Raceway is home to some of the coolest rides in the country and our friend JMalcom2004 was on hand to catch one of them laying down a couple of great looking passes at the iconic Southern Florida facility.

This Regal looks like your every day G-Body riding on big rims, but it’s packing a potent punch thanks to the boosted 5.3 liter LS engine under the hood. However, not only is the engine turbocharged, it has a healthy dose of nitrous, adding even more horsepower to the already stout combination. While the car looks and sounds relatively tame, when the driver drops the hammer the car rockets down the track much quicker than anybody would expect.

It takes a lot of power to make a car this heavy roll out this quickly, but the nature of the grudge game dictates that the combo be kept relatively secret. The only reason we know it’s an LS is because the camera guy Justin gathered some intel for the video. According to the comments, the car has a 5.3 liter engine that was built by Gangsta Made Authentic, and you can clearly hear the turbo spooling up in the burnout, as well as the nitrous purge just before the car stages up to run. The combination of nitrous and boost works well together because the nitrous not only provides a shot of horsepower, it also cools the incoming air, which is often hotter than the ambient air due to the exhaust spooling the turbocharger.

It’s also impressive to see this car hook with such big wheels and low profile tires. Generally speaking, a tire needs some flex in the sidewall to hook, but these don’t have much in the way of a sidewall at all, yet the car hooks just fine even with the boost and nitrous putting in work.