When you have that hankering for horsepower like most of us do, every ride you get ...

When you have that hankering for horsepower like most of us do, every ride you get your hands on ends up being modified to some extent. Even the cars and trucks we buy for daily-driver use end up with at least a tune, exhaust and maybe even heads and cam, just so we know if we pull up alongside the same ride at a redlight, we can smoke them.

Daddy Dave may have taken that to the extreme, but what do you expect from one of the most well-known and highly-respected drivers from the most popular automotive television show on the air? Dave started out with this little S-10 with the intention of dropping an LS under the hood and driving it back and forth to work. That lasted all of like, three days.

As is the case with many projects, things continued to evolve to the point of the truck being strapped with twin turbos bolted to the hardly-stock 6.0 liter engine. I don’t know what kind of power it makes, but with the truck blasting to 150+ MPH in the quarter, it certainly makes plenty. But, Dave wants more.

With plenty of power on tap, the truck itself needs some upgrades to help put those ponies to work. Dave pulled the cab and bed off the truck and had the chassis powder coated. Not only does this look great, but the coating helps protect the chassis from the elements. He had a transbrake-equipped slushbox built to bolt back behind the engine, as well as a new torque converter that should help knock the two plus seconds off the elapsed time to get the ET’s to match up with the potential shown by the MPH.

Look for the truck to be buttoned back up soon, when Daddy Dave will likely hit the strip for testing to dial in the overhauled hauler and pursue his goal of running 8-second quarter mile times in a truck he can drive back and forth daily. 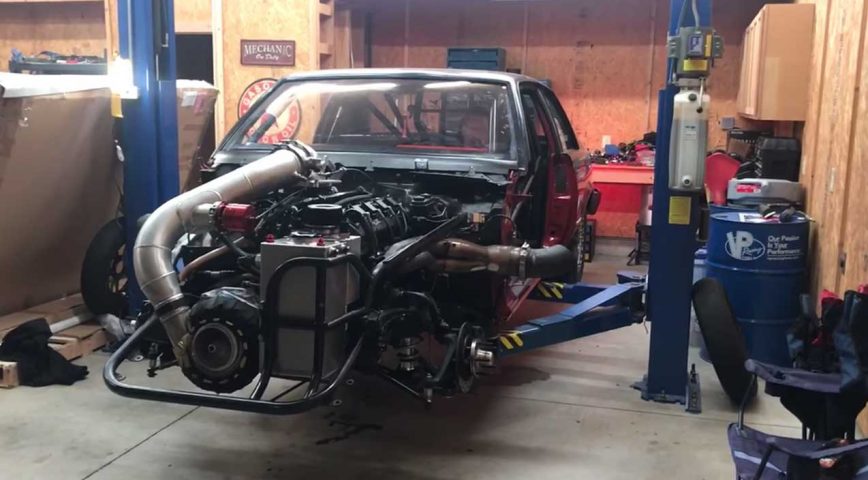