Daddy Dave vs Dominator at the Route 66 Raceway – Maple Grove 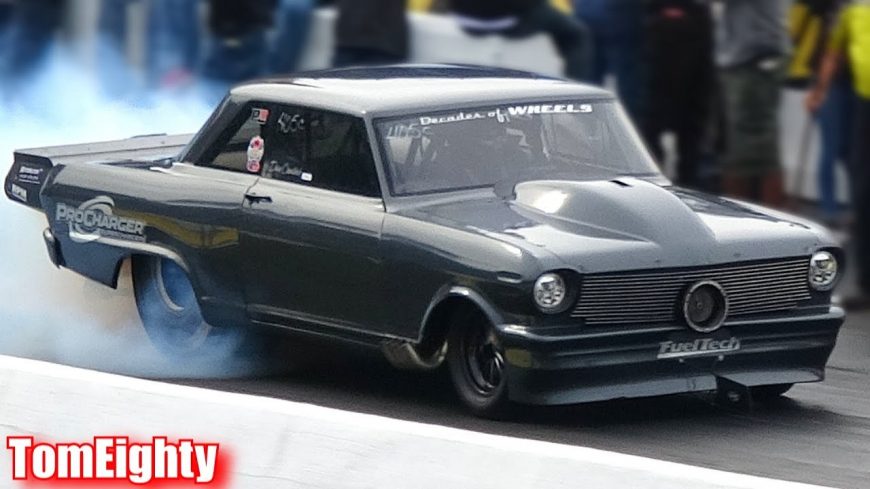 The No Prep Kings are making their way across the country, hitting stops at drag strips from coast to coast as filming for the show’s second season and beyond. The popular Street Outlaws spinoff has built quite an audience and is continues to draw fans as they criss-cross the nation for their events. Last weekend, the show rolled into Maple Grove Raceway in Mohnton, Pennsylvania, where some of the featured matchups were captured by YouTuber TomEighty who joined the hundreds of fans in attendance to catch the action.

The first pair up in this compilation are both names you should recognize, especially if you watch Street Outlaws, even as a casual viewer. Daddy Dave in his wicked ProCharged Chevy II known as Goliath lined up alongside Joe Woods, or Dominator as most know him, in his twin turbocharged Dodge Dart. What should have been a great race failed to materialize though, as Dominator’s car stood up on the wheelie bars so hard that he unloaded the rear tire, causing tireshake so severe it could be seen from the stands, as you’ll see in the slow motion reply.

Daddy Dave and Goliath moved on to face Jerry Bird in The Probe the next round, only to come up short against the big-inch nitrous powered Ford from from the Street Outlaws New Orleans franchise. That wasn’t the end of the day for Dave though, as he would continue to line up and run against several more strong competitors, including Shawn Wilhoit in The Mistress and Disco Dean Karns in Stinky Pinky, both of which Dave took down fairly easily.

The final or Outlaw Big Tire, though, would find some stiff competition in the other lane, with none other than Kye Kelley and his new Aftershock Camaro. As we all know, Kelley has been known for taking out the 405’s top runners and he has Aftershock lined out and working well, so Dave knew he needed to be on top of his game.

When the green flashed, Dave jumped all over it, moving first visibly and pulling out to a lead and holding of the strong top end charge of the nitrous-injected Aftershock to take the win back to OKC.