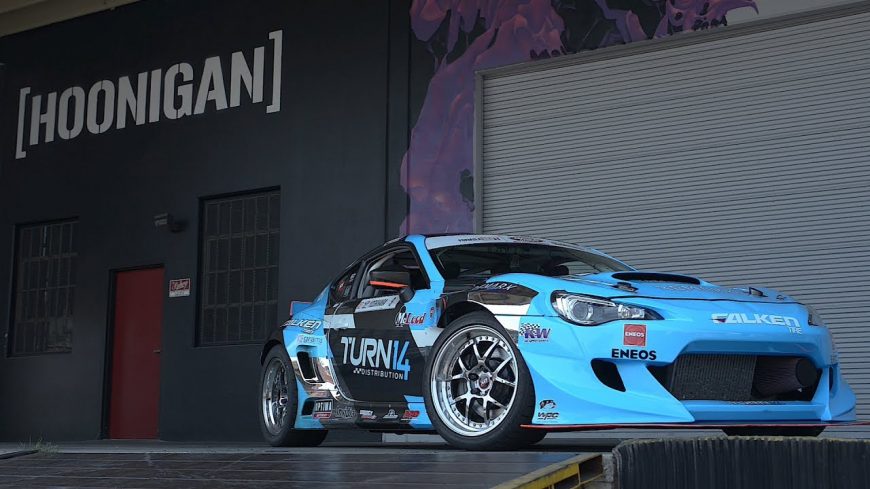 With the collection of cars that have stopped by Hoonigan’s Donut Garage and shown off in episodes of Daily Transmission, it’s pretty hard for each car to top the last, this time, however, we check out a machine that might be one of our favorites to ever cross paths with these tires shredding maniacs who will stop at nothing to kill some rubber in the most epic ways that you could possibly imagine. You never know who is going to show up but one thing that you do know is that each and every episode is bound to pack a punch that will make you cling on and beg for more.

This time, we check In with the guys as a Subaru BRZ hits the scene but this isn’t just any Subaru, oh no, this is the Formula Drift machine being wheeled by Dai Yoshihara and even in this confined space, he isn’t hesitating to unleash all of the ponies under the hood of this vicious import.The result is a show that is nothing short of a blast to watch as tires turn to smoke yet again just like we have become quite accustomed to in these episodes. However, he takes it to another level entirely by drifting off of a loading dock in the process!

Follow along with the always energetic display from the guys over at Hoonigan in the video below and be sure to tell us what you think with the latest and greatest installment that has tires turning smoke, cars sliding sideways, and exhaust notes that might help your hair to stand on edge.

I’m not sure how they do it, but with each and every episode of Daily Transmission, we get an even more action-packed adrenaline pumping machine that’s ready to put it all on the line to put on a show!

« A Ship Launch That Can’t Go Much Worse… Huge Fail