Dale Earnhardt Gives us the Tour of His Personal 57 Chevy

Dale Earnhardt Gives us the Tour of His Personal 57 Chevy

Just because a driver races in NASCAR isn’t to say that they are the biggest ...

Just because a driver races in NASCAR isn’t to say that they are the biggest car fanatic in the world. In fact, just like any other job, we have heard of NASCAR drivers really wanting to leave the driving at the track. While they are some of the best in the world behind the wheel of a car, that might not carry over so much into their personal lives. These drivers treat their work just as you probably treat your work. There aren’t too meet people who are passionate about bringing their job home with them.

On the other hand, though, with a guy like Dale Earnhardt, he ate, slept, and breathed cars. Perhaps, this is a big part of what took him to the top and made him the legend that he would become.

Behind the scenes, Earnhardt had a whole collection of cars that he was passionate about. In this one, we get the opportunity to tour a couple of those machines in a spectacular throwback.

In this video segment from “Dream Car Garage Ask The Pro 2001: Dale Earnhardt Sr,” we get to check out some Earnhardt rides. Between them, we find a trick 57 Chevy and a Corvette race car.

In terms of the 57, Dale tells us that the 6 cylinder doesn’t make much power but it’s a great cruiser. As it turns out, even Dale Earnhardt wanted to have a relaxing drive now and then. The car might not always be a candidate to go wide-open throttle. However, there is still joy in a big and heavy cruiser from time to time.

Following the 57, we get the bonus of seeing the Corvette race car that Earnhardt would be found behind the wheel of with his son, Dale Earnhardt Jr. The machine was designed to be able to handle 24 straight hours of racing. The 427 was restricted to be able to compete in the 24 Hours at Daytona but seemed to be a ride that Earnhardt was passionate about and proud of. Today, as far as we know, this is one car that Dale Earnhardt Junior says he would never let go of.

By following along with the video below, we get to take a walk down memory lane and join in on some of the rides that got the Intimidator going! – Legendary Motorcar Company 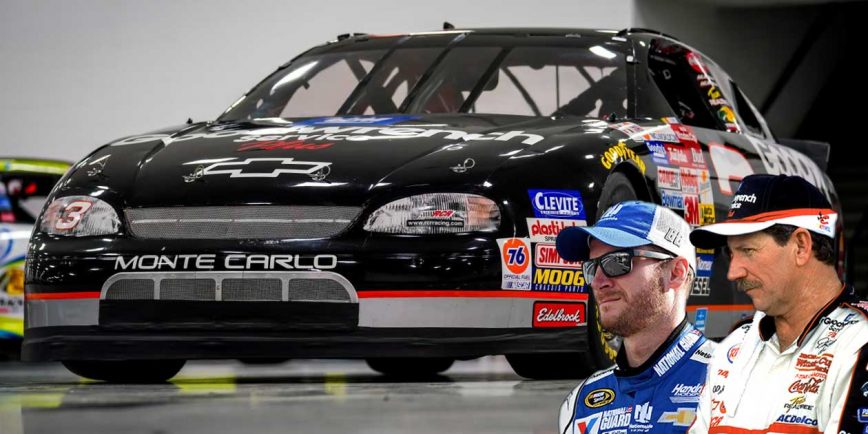