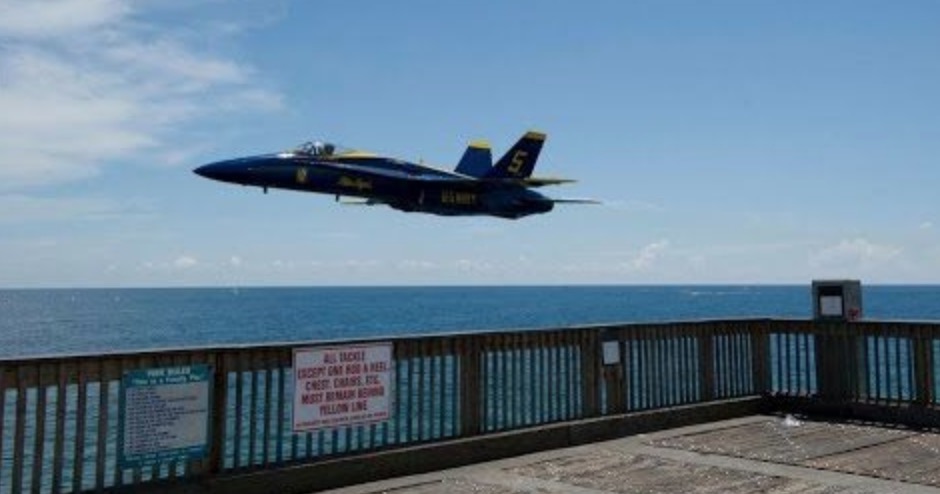 There is something so amazingly primal about a fighter jet screaming across the sky. Little boys dream about flying them, little girls dream about kissing those little boys, and everybody loves to watch as they reach insane speeds, tickling the sound barrier as they fly just overhead of the crowds below.

While breaking the sound barrier, at least over land, is a big no-no, these fighter pilots know they can push right up to the edge of Mach 1 without getting in trouble, and let’s be honest here… seven hundred miles per hour – give or take a few – is pretty freakin badass. These crowds are gathered and ready for the show, at least they think they are. If you watch around the 12 second mark, though, it appears a screaming jet manages to sneak up on this particular group of spectators, prompting them all to jump out of their shoes when the jet screams by just yards overhead.

Next up, another sneak attack on the crowd, this time with a diversion. A quartet of jets performs a maneuver high in the sky, doing a loop with their smoke trails on that entrances the crowd far below. However, as those jets pull out of their stunt, a fifth jet blasts the crowd with a low-altitude, high-speed flyby, again just a couple hundred feet above. You can see the reaction of the crowd as the fighter jet screams past, leaving them cheering for more.

This type of stunt is exactly what brings out thousands and thousands of fans to airshows and exhibitions every year as they watch some of the best pilots in the world operating these planes at insane speeds and altitudes. They pull off dizzying stunts and hair-raising maneuvers that leave you certain they actually made contact in midair. What better way to get your adrenaline pumping???

« Cleaning, and Detailing A Car Interior Is Oddly Satisfying To Watch