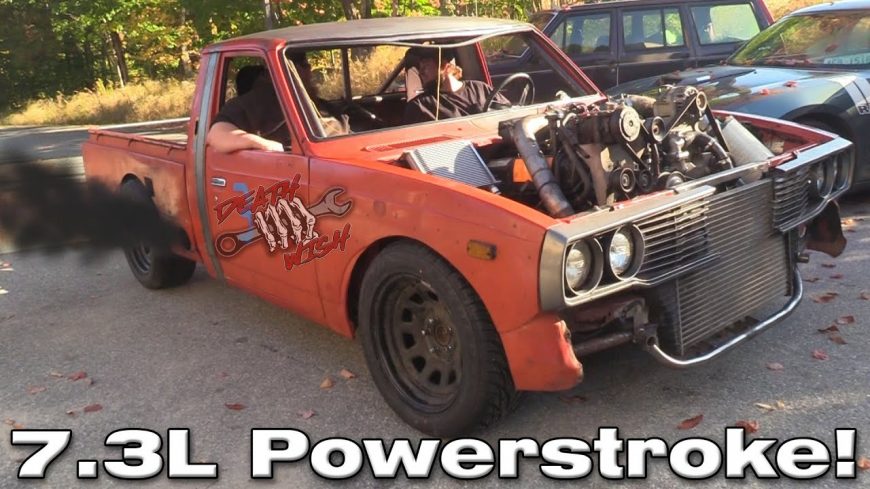 For those who remember the LS Powered Toyota Hilux built by Josh Mazerolle, they’ve already been treated to one of Josh’s wild creations. The story behind the truck is absolutely crazy. We would recommend checking it out when you get the chance.

This time, though, Mazerolle is at it again with a new creation. The apple of his eye this time is yet another Hilux. I guess that the first build ended up so well that Josh and his “Gang of would-be mechanics” wanted to take on another.

The source of the power is going to be a world apart from the LS we saw last time, though. Instead, we’re going to be taking a look at a Hilux powered by a 7.3L Power Stroke diesel engine. We’re equally intrigued to see how this one ends up panning out. There simply aren’t many builds like this out there.

In this feature, we watch as Josh and company build the truck for their friend, Fat Erik. They say that Erik is a little different and wanted something different under the hood of his truck. We would certainly say that this mission was accomplished with the build on tap.

The guys would run into an issue when they found that the engine wouldn’t fit in the Hilux in question. Therefore, we’re in for a pretty good amount of custom modification. This includes not only a custom chassis but also a stretched and widened body as well.

The kicker here is that the crew is looking to build it all in just 30 days with the help of Rev’s Enterprises and Rattlebox Fab. By following along below, we get to ride along for the adventure. Stay tuned because we’re promised even more rolling coal, dyno pulls and tire smoke from the second rendition of the Deathwish Hilux! – BUSTED KNUCKLE FILMS

« Ford Recalls 268,000 Vehicles Due to Faulty Door Latch That Could Fail While Driving